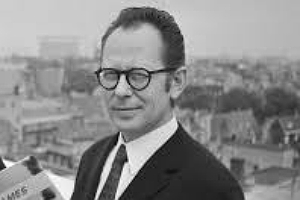 Belgian cartoonist, known for the comic western that he created in 1946, "Lucky Luke," the adventures of a poor lonesome cowboy with his talking horse, Jolly Jumper. Since 1947, it has been translated into more than 30 languages and has sold more than 300 millions albums worldwide. Morris’ sartorial trademark is a bow tie.

Maurice studied animation techniques through a distance-learning program, and at age 20, he got a job in an animation studio. In 1945, he joined the éditions Dupuis. In 1948, he and two companions traveled to the United States, a trip that for Morris lasted six years. Always hugely interested in the history of the Wild West, he traveled extensively through the West, the South, the Rockies and the Rio Grande, observing and learning. Back in New York, he became friends with René Goscinny, and upon their return to Europe, they decided to work together. With Goscinny doing the scripting and Morris providing the drawings, "Lucky Luke" became an immediate success, and the series was later adapted to the screen. Their collaboration lasted until Goscinny’s death in 1977, after which Morris teamed up with various others to continue producing "Lucky Luke." He owns his own publishing house, "Lucky Productions."

In 1988, Morris received a special award from the World Health Organization for having had "Lucky Luke" give up smoking in 1983, thereby setting a good example for others.