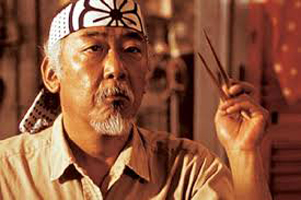 Japanese-American character actor, a star of television and film, best remembered as the wise and benevolent martial arts teacher Mr. Miyagi in four “Karate Kid” films (1984-1994) and as Arnold in the popular TV series “Happy Days.” He made guest appearances on early TV hit series such as “M*A*S*H,” “Love Boat,” “Sanford and Son”(as Ah Chew) and “Magnum, P.I.,” as well as being a frequent guest on variety and talk shows. Morita eventually starred in his own short-lived show “Mr. T and Tina”(1976), becoming the first Japanese-American to star in series TV. He made his first screen appearance in “Thoroughly Modern Millie” in 1967.

Morita began his career as a stand-up comedian in the early ‘60s, nicknamed “The Hip Nip.” For two decades he used stories about Japanese-American culture as the basis for his comedy. He played nightclubs and bars, eventually graduating to headlining in Las Vegas showrooms, Playboy Clubs and Carnegie Hall. Morita was also a member of the improvisational comedy group “The Groundlings” in the ‘70s. Morita’s up and down career demonstrated resourcefulness and adaptability, and his success came with hard work and persistence.

That persistence was learned early in life. Morita was born in Isleton, CA, a suburb of Sacramento and was the son of itinerant fruit pickers who became restaurant owners after WWII. He was sickly as a child and spent ages two to nine years in a couple of northern California hospitals with spinal tuberculosis. Much of the time he was in a full body cast and he was told he would never walk again. After a Northern California Shriner’s Hospital performed vertebrae fusion surgery on his back he was able to walk at age 11. By then the United States had entered WWII and ages 11 to 15 were spent in two different American Japanese internment camps, along with his older brother Harry and his parents. Morita recalled those times in People Weekly in 1986: “They were enormously difficult years for our people. Suicides, people walking into the desert never to be seen again, or hanging themselves. It was horrible. Horrible.” Morita was also quoted as saying “I feel great sorrow and have many deep, emotional scars from what happened….I don’t like to talk about it too much …..but I am fortunate that through the Great Spirit I was able to survive it, and go beyond it, longer than the memory.” After the war ended, Morita worked as a fruit picker and helped out at his family’s Chinese restaurant while attending Armijo High School in Fairfield, CA.

The quick-witted Morita learned to be a computer programmer and worked in the computer data processing field for various agencies in the state until about age 28, ultimately becoming a department head at an Aerojet General facility. He grew bored working with computers, however, and the desire to do comedy was so strong that in 1960, against the wishes of his family, he embarked on a comedy career. His first marriage to Kathleen Yamachi (1953-1967) was destroyed by the demands of his new venture. Morita married three times altogether, divorced twice and had three daughters, Erin, Aly and Tia (born with nephrotic syndrome), by his first two wives.

In 1985 he became the first Asian-American ever nominated for a Best Supporting Actor role in “The Karate Kid.” Morita was also nominated in 1986 for Outstanding Supporting Actor in a Miniseries for “Amos.” He was also nominated for two Golden Globes and has a star on the “Hollywood Walk of Fame.” Morita stood 5’ 3” tall, was a smoker, had problems with alcohol and was prone to obesity. He died November 24, 2005, at his home* in Las Vegas, Nevada of “natural causes*” at the age of 73. He was survived by three former wives, three daughters and two grandchildren. (*There is conflicting information about the location and cause of death: His third wife, Evelyn Guerrera, from whom he was separated, said he died at home of natural causes then later said complications associated with alcoholism; his former manager, Arnold Soloway, said Pat was awaiting a kidney transplant and died of kidney failure in the hospital and his daughter Aly said he died in a local hospital