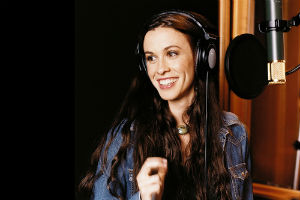 A top female singer in the '90s. Her LP "Jagged Little Pill" sold nearly 20 million copies, a song which summed up the anger and angst of adolescence and brought her four Grammy's and a wave of adulation and success. Her second album, "Supposed Former Infatuation Junkie," was released on 3 November 1998 and shot to the top of the charts. The album possessed a clarity, both lyrically and musically, that was oftentimes missing from Morissette's breakthrough first album.

She was raised by schoolteacher parents with a twin brother and an older brother. She made an incredibly early start in a show biz career at ten on the Nickelodeon's TV series. She had her own record company at 14 and her debut album, "Alanis" went platinum when she was 17.

In 1993 Morissette was the victim of a mugging. Her full reaction was delayed until she went home for a visit at Christmas 1994 and was hit with a serious anxiety attack. She had a long period of crying jags and fainting spells. After searching her soul in therapy, she came out with "Pill," going from teen disco queen to head-banging keening and ranting on the dark side.

The rocker became engaged to actor Ryan Reynolds in spring 2004. Their relationship ended in February 2007. She married rapper Mario “MC Souleye” Treadway (born 3 May 1980 in Boston, Massachusetts) on 22 May 2010. Their first child, Ever Imre Morissette-Treadway, was born on December 25, 2010.