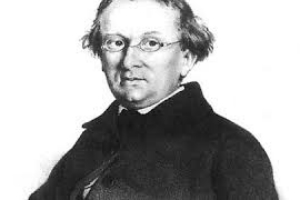 Mörike was born in Ludwigsburg. His father was Karl Friedrich Mörike (d. 1817), a district medical councilor; his mother was Charlotte Bayer. He attended the Latin school at Ludwigsburg, and the seminary at Urach (1818) where he made the acquaintance of Wilhelm Hartlaub and Wilhelm Waiblinger. He then studied theology at the Seminary of Tübingen where he met Ludwig Bauer, David Friedrich Strauss and F. T. Vischer.

He followed an ecclesiastical career, becoming a Lutheran pastor. In 1834 he was appointed pastor of Cleversulzbach near Weinsberg, and, after his early retirement for reasons of health, in 1851 became professor of German literature at the Katharinenstift in Stuttgart. This office he held until his retirement in 1866; but he continued to live at Stuttgart until his death. In what political and social views he espoused, he was monarchist and conservative.

His first published work was the short novel Maler Nolten (“The painter Nolten”, 1832; 6th ed., 1901), a Bildungsroman and fantastic tale dealing with artist life which revealed his imaginative power and enjoyed great popularity. The novella Mozart auf der Reise nach Prag (“Mozart on the way to Prague”, 1856) was a humorous examination of the problems of artists in a world uncongenial to art. It is frequently cited as his finest achievement. He also wrote a somewhat fantastic Idylle vom Bodensee, oder Fischer Martin und die Glockendiebe (1846; 2nd ed., 1856), the caprice Das Stuttgarter Hutzelmännlein (1855), and published a collection of hymns, odes, elegies and idylls of the Greeks and Romans, entitled Klassische Blumenlese (1840). He did translations of Anacreon and Theocritus.

Mörike's Gesammelte Schriften (“Collected Writings”) were first published in 1878 (4 vols.). Later editions are those edited by R. Krauss (6 vols., 1905), and the Volksausgabe (“Popular edition”), published by Göschen (4 vols., 1905). Selections from his literary remains were published by R. Krauss in Eduard Mörike als Gelegenheitsdichter (1895), and his correspondence with Hermann Kurz, Moritz von Schwind, and Theodor Storm, by J. Bachtold (1885–1891); an edition of Mörike's Ausgewählte Briefe (“Selected letters”), in 2 vols., appeared 1903-1904.

Many of his lyrics were set to music by Hugo Wolf, Ludwig Hetsch and Fritz Kauffmann. Ignaz Lachner set to music his opera Die Regenbrüder. Many of his poems became established folksongs.