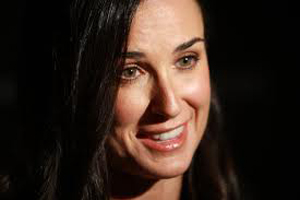 Demi Moore (born Demetria Gene Guynes on November 11, 1962 in Roswell, New Mexico) is an American actress. She became well-known after a string of 1980s teen-oriented movies, and became one of the best known actresses in 1990s Hollywood.

After quitting school, Moore went to work as a pin-up girl, modelled for European photographers, and worked at a collection agency. In the early 1980s, Moore posed for a series of photographs featuring full frontal nudity. These photos went unnoticed until after she became a star, and were eventually published in a German magazine and later in North America. Moore's film debut was in the 1982 3-D science fiction/horror film, Parasite, which was a hit on the drive-in circuit, ultimately grossing $6 million. However, Moore was not widely known until she played the part of Jackie Templeton on the ABC soap opera, General Hospital, from 1982 to 1983. Appropriately, she also had an uncredited cameo at the end of the 1982 spoof Young Doctors in Love.

In the mid 1980s, she was mentioned as being a member of the Brat Pack and appeared in the youth-oriented films St. Elmo's Fire and About Last Night.

For a time during the 1990s, Moore was the highest-paid actress in Hollywood. She had a string of box-office successes, including Ghost, A Few Good Men, Indecent Proposal and Disclosure for which she was the first actress to reach the $10 million salary mark. Among other films for which Moore was considered were Basic Instinct, Flashdance, Runaway Bride, and While You Were Sleeping.

Moore's reputation suffered in the mid 1990s when her starring vehicles The Scarlet Letter, The Juror, Striptease, and G.I. Jane (a movie in which Moore shaved off all her long hair on camera, leaving her head totally bald) failed at the box office and garnered mixed reviews. Demi Moore was a founding "celebrity investor" in the Planet Hollywood chain of international theme restaurants (modeled after the Hard Rock Cafe and launched in New York on October 22, 1991) along with Bruce Willis, Sylvester Stallone and Arnold Schwarzenegger.

Demi Moore appeared nude during pregnancy on this famous Vanity Fair (August, 1991)In August 1991, Moore appeared nude on the cover of Vanity Fair magazine while seven months pregnant with her daughter Scout LaRue, with enormous attendant publicity. The image was endlessly parodied (including by Spy magazine, which placed her then-husband Bruce Willis's head on her body), but also spawned honest imitators as other pregnant celebrities posed nude. Moore again appeared on the cover of Vanity Fair in August 1992, wearing only a body painted "suit".

In 2006, she appeared in Bobby which featured an all-star cast including her husband Ashton Kutcher although they did not appear in any scenes together. On June 1st of 2007 her next film Mr. Brooks is to be released.

She has been described by her Passion of Mind co-star Joss Ackland as "not very bright or talented". However, on the May 11, 2007 Mother's Day episode of the Oprah Winfrey show, Oprah called Demi "so smart...so wise." In the 5/11/07 episode, clips from a documentary interview with Maria Shriver revealed much about Demi's relationship with her mother.