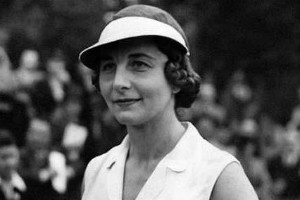 Helen Newington Wills (October 6, 1905 – January 1, 1998), also known as Helen Wills Moody and Helen Wills Roark, was an American tennis player. She has been described as "the first American born woman to achieve international celebrity as an athlete."

She was born Helen Newington Wills in Centerville, California and attended the University of California, Berkeley.

She married Frederick Moody in December 1929. She won approximately one-half of her major championships as "Helen Wills" and one-half as "Helen Wills Moody". Wills divorced Moody in 1937 and married Aidan Roark in October 1939. She died on January 1, 1998, aged 92.

Wills was reported to be an introverted and detached woman. On court, she rarely showed emotion, ignored her opponents, and took no notice of the crowd. Kitty McKane Godfree, who inflicted the only defeat Wills suffered at Wimbledon during her career, said, "Helen was a very private person, and she didn't really make friends very much." Hazel Hotchkiss Wightman said, "Helen was really an unconfident and awkward girl—you have no idea how awkward.... I thought of Helen as an honestly shy person who was bewildered by how difficult it was to please most people." Because of her unchanging expression, Grantland Rice, the American sportswriter, bestowed on Wills the nickname "Little Miss Poker Face". As her success and, ironically, unpopularity with the public increased, she was called "Queen Helen" and "the Imperial Helen". In her own defense, Wills said in her autobiography, "I had one thought and that was to put the ball across the net. I was simply myself, too deeply concentrated on the game for any extraneous thought."

She typically wore a white sailor suit having a pleated knee-length skirt, white shoes, and a white visor.

On February 16, 1926, the 20-year-old Wills met Suzanne Lenglen, six-time Wimbledon champion, in the final of a tournament at the Carlton Club in Cannes. It was the only time they played each other. Public anticipation of their match was immense, resulting in high scalper ticket prices. Roofs and windows of nearby buildings were crowded with spectators, including the King of Sweden. Both players were nervous, with Lenglen drinking brandy and water at one point to calm her nerves. Lenglen won the match 6–3, 8–6 after being down 2–1 in the first set and 5–4 in the second set. Wills had a set point in the second set and believed she had won the point that would have won her the set, but a linesman disagreed. In one of the few times she showed emotion on court, she spoke angrily to the linesman over the call. After the match, Lenglen's father advised her that she would lose her next match to Wills if they met again soon, and Lenglen avoided Wills for the remainder of the spring. Wills did not get a second chance to meet Lenglen. Wills had an emergency appendectomy during the 1926 French Championship, which caused her to default her second round match and withdraw from Wimbledon, which also was considered a default. Lenglen turned professional after the 1926 season.

After she returned to the United States, Wills attempted a comeback from her appendectomy, lost two matches, and on the advice of her doctor, withdrew from that year's U.S. Championships. Apart from those two losses, beginning with the 1923 U.S. Championships, Wills lost only four matches in three years: once to Lenglen, twice to Kathleen McKane Godfree, and once to Elizabeth Ryan. Wills had winning overall records against the latter two. In 1927, a revived Wills began her streak of not losing a set until the 1933 Wimbledon Championships.

During the 17 year period from 1922 through 1938, Wills entered 24 Grand Slam singles events, winning 19, finishing second three times, and defaulting twice as a result of her appendectomy. Her streak of winning U.S. Championships seven times in seven attempts ended when she defaulted to Helen Hull Jacobs during the 1933 final because of a back injury. At the time, Jacobs was leading in the third set. Because she felt the press and fans treated her harshly at the U.S. Championship, Wills decided never to play there again. After taking a year off to recuperate, Wills came back to win the 1935 and 1938 Wimbledon titles before retiring permanently, beating Jacobs both times.

Charlie Chaplin was once asked what he considered to be the most beautiful sight that he had ever seen. He responded that it was "the movement of Helen Wills playing tennis."

When asked in 1941 about whether Wills or Lenglen was the better player, Elizabeth Ryan, who played against both of them in singles and partnered both in doubles, said, "Suzanne, of course. She owned every kind of shot, plus a genius for knowing how and when to use them." However, Wills and Lenglen are seen as having completely different skills and strategies. Wills served and volleyed with unusually powerful forehand and backhand strokes, and she forced her opponents out of position by placing deep shots left and right. Lenglen was more physically nimble, and she was more imaginative—able to quickly change shots in response to conditions. Lenglen was a master of the drop shot and close net work, which was Wills' soft spot. Aware of her weakness at the net, Wills drove her opponents deep into the backcourt as much as possible. Playing Wills was, according to Helen Jacobs, like playing "a machine... with implacable concentration and undeniable skill" yet with little flexibility.

Analogizing Wills's game to poker, George Lott, a 12 time winner of Grand Slam doubles titles and a contemporary of Wills, once said, "Helen’s expression rarely varied and she always tended strictly to business, but her opponents were never in doubt as to what she held: an excellent service, a powerful forehand, a strong backhand, a killer instinct, and no weaknesses. Five of a kind! Who would want to draw against that kind of hand?"