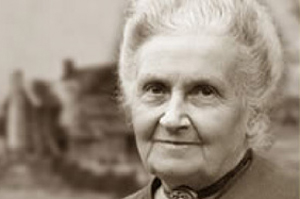 Maria Montessori (August 31, 1870 – May 6, 1952) was an Italian physician, educator, philosopher, humanitarian and devout Catholic; she is best known for her philosophy and method of education of children from birth to adolescence.

Her educational method is in use today in a number of public as well as private schools throughout the world.

Maria Montessori was born in Chiaravalle (Ancona), Italy to Alessandro Montessori and Renilde Stoppani. Montessori was the first woman to graduate from the University of Rome La Sapienza Medical School. She was a member of the University's Psychiatric Clinic and became intrigued with trying to educate the "mentally retarded" and the "uneducable" in Rome. In 1898, she gave a lecture at the Educational Congress in Torino about the training of the disabled. The Italian Minister of Education was in attendance, and was impressed by her arguments sufficiently to appoint her the same year as director of the Scuola Ortofrenica, an institution devoted to the care and education of the mentally retarded. She accepted, in order to put her theories to proof. Her first notable success was to have several of her 8 year old students apply to take the State examinations for reading and writing. The "defective" children not only passed, but had above-average scores, an achievement described as "the first Montessori miracle."

Because of her success with these children, she was asked to start a school for children in a housing project in Rome, which opened on January 6, 1907, and which she called "Casa dei Bambini" or Children's House. The success of this school sparked the opening of many more, and a worldwide interest in Montessori's methods of education.

Maria Montessori died in The Netherlands in 1952, after a lifetime devoted to the study of child development. Her early work centered on women’s rights and social reform and evolved to encompass a totally innovative approach to education. Her success in Italy led to international recognition, and for over 40 years she traveled all over the world, lecturing, writing and establishing training programs. In later years, ‘Educate for Peace’ became a guiding principle, which underpinned her work.

After the 1907 establishment of Montessori's first school in Rome, by 1913 there was an intense interest in her method in North America, which later waned. (Nancy McCormick Rambusch revived the method in America by establishing the American Montessori Society in 1960). Montessori was exiled by Mussolini mostly because she refused to compromise her principles and make the children into soldiers. She moved to Spain and lived there until 1936 when the Spanish Civil War broke out. She then moved to The Netherlands until 1939. During a teachers conference in India she was interned by the authorities and lived there for the duration of the war. Montessori lived out the remainder of her life in The Netherlands, which now hosts the headquarters of the AMI, or Association Montessori Internationale. She died in Noordwijk aan Zee. Her son Mario headed the AMI until his death in 1987.

Pedagogy
Aside from a new pedagogy, among the premier contributions to educational thought by Montessori are:

children as natural learners
instruction of children in 3-year age groups, corresponding to sensitive periods of development (example: Birth-3, 3-6, 6-9, and 9-12 year olds with an Erdkinder (German for "Children of the World") program for early teens
children as competent beings, encouraged to make maximal decisions
observation of the child in the environment as the basis for ongoing curriculum development (presentation of subsequent exercises for skill development and information accumulation)
small, child sized furniture and creation of a small, child-sized environment (microcosm) in which each can be competent to produce overall a self-running small children's world
creation of a scale of sensitive periods of development, which provides a focus for class work that is appropriate and uniquely stimulating and motivating to the child (including sensitive periods for language development, sensorial experimentation and refinement, and various levels of social interaction)
the importance of the "absorbent mind," the limitless motivation of the young child to achieve competence over his or her environment and to perfect his or her skills and understandings as they occur within each sensitive period. The phenomenon is characterized by the young child's capacity for repetition of activities within sensitive period categories (Example: exhaustive babbling as language practice leading to language competence).
self-correcting "auto-didactic" materials (some based on work of Jean Marc Gaspard Itard and Edouard Seguin)

Influence
A conference in Rome on 6/7th January 2007 heralded the start of a year of celebrations for children and schools around the world. Dr. Maria Montessori’s innovative approach was that “Education should no longer be mostly imparting of knowledge, but must take a new path, seeking the release of human potentialities.”

What followed worldwide has been called the "discovery of the child" and the realization that: "...mankind can hope for a solution to its problems, among which the most urgent are those of peace and unity, only by turning its attention and energies to the discovery of the child and to the development of the great potentialities of the human personality in the course of its formation.”

The efficacy of Montessori teaching methods has most recently been demonstrated by the results of a study published in the US journal, Science (29 September 2006) which indicates that Montessori children have improved behavioral and academic skills compared with a control group from the mainstream system. The authors concluded that, "when strictly implemented, Montessori education fosters social and academic skills that are equal or superior to those fostered by a pool of other types of schools."

The Montessori method of education that she derived from this experience has subsequently been applied successfully to children and is quite popular in many parts of the world. Despite much criticism of her method in the early 1930s-1940s, her method of education has been applied and has undergone a revival. It can now be found on six continents and throughout the United States.

Her teaching strategies have also been praised by philosopher and novelist Ayn Rand, who considered Montessori's methods, and their revival in The United States in the 60s, as a more individualistic and reason-based alternative to what she saw as the shortcomings of progressive education.

The Association Montessori Internationale is member of the International Coalition for the Decade for the Culture of Peace and Nonviolence.

Trivia
In 1980, Maria Montessori was pictured on the Italian 200 lire coin and through the 1990s on the 1000 lire bill, by far the most common one, replacing Marco Polo, until Italy adopted the Euro.