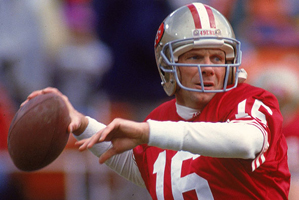 American football quarterback who led the San Francisco '49ers to a Super Bowl XIX championship on 1/20/1985. He is a natural athlete and began playing football at the age of eight. By his senior year in high school dozens of top football colleges were recruiting him, but his heart was set on Notre Dame, where he led the school to a national championship in 1977.

He wrote an autobiography entitled "Audibles-My Life In Football," along with Bob Raissman, in 1986. He finally retired from football on 4/18/1995 after playing for 16 years, (achieving the league's MVP twice, Super Bowl MVP award three times) and winning four Super Bowl rings. A second book "Joe Montana's Art and Magic of Quarterbacking" explains why preparation, humility and leadership skills will serve anyone well.

A 6'2" blue-eyed blond, he was first married in 1981 to a stewardess, Cass Castillo, with whom he had been living since 1979. In 1985 he married a fashion model by the name of Jennifer with whom he had two girls and two boys. He and Jennifer did sexy underwear commercials together. By 1994 he was making $5 million a year.

On 7/29/2000, Montana and former teammate Ron Lott were indicted into the Pro Football Hall of Fame, along with Howie Long, Dan Rooney and Dave Wilcox. The ceremony was attended by 111 of the 136 living Hall members and an estimated fan attendance of 18,000.

In late September 2000, Montana joined former San Francisco 49ers teammates Ronnie Lott and Harris Barton as a general partner in Champion Ventures, an investment fund for professional athletes, who are customarily handicapped by short careers and poor financial advice. CV is pooling money from 300 athletes and investing in the best-known venture capital firms.

He and Jennifer moved with their four kids up to the Napa ranch for a slower lifestyle in June 2000. Too slow for the kids and perhaps for Joe, who spends much of his time riding horses or working on e-mail with the CV venture.