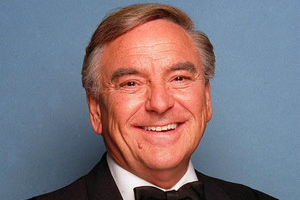 Robert Alan 'Bob' Monkhouse OBE (1 June 1928 – 29 December 2003) was an English entertainer. He was a successful comedy writer, comedian and actor and was also well known on television as a presenter and game show host.

Bob Monkhouse was born at 168 Bromley Road, Beckenham, Kent, the son of Wilfred Adrian Monkhouse (1894–1957) and Dorothy Muriel Monkhouse née Hansard (1895–1971). Monkhouse had an elder brother, John, who was born in 1922. Monkhouse's grandfather was a prosperous Methodist businessman who co-founded Monk and Glass, which made custard powder and jelly.

Monkhouse completed his National Service with the Royal Air Force in 1948. He won a contract with the BBC after his unwitting RAF group captain signed a letter that Monkhouse had written telling the BBC he was a war hero and that the corporation should give him an audition.

Before establishing himself as a successful writer and comedian, Monkhouse appeared on stage in London, first as Aladdin in a stage show of the same name written by S J Perelman and Cole Porter. Then in the first London production of the musical The Boys from Syracuse (Antipholus of Syracuse) in 1963 at the Theatre Royal, Drury Lane, alongside Ronnie Corbett.

Monkhouse's adult career began as a scriptwriter for radio comedy in partnership with Denis Goodwin, a fellow Old Alleynian with whom he also compèred Smash Hits on Radio Luxembourg. Aside from performing as a double act, Monkhouse and Goodwin wrote for comedians such as Arthur Askey, Jimmy Edwards, Ted Ray and Max Miller. In addition, they were also gag writers for American comedians including Bob Hope when they wanted jokes for British tours. Indeed, when Goodwin broke up the partnership in 1962 it was to go and work for Hope.

In 1956, Monkhouse was the host of Do You Trust Your Wife?, the British version of an American game show. He went on to host more than 30 different quiz shows on British television.[3] His public profile growing, Monkhouse also began appearing in comedy films including the first of the Carry On film series, Carry On Sergeant in 1958.

He appeared in Dentist in the Chair and later regretted not choosing the Carry Ons over the dental comedies. Other presenting jobs in the 1960s included hosting Candid Camera and compèring Sunday Night at the London Palladium. Around 1969 he was a partner, with Malcolm Mitchell, in the Mitchell Monkhouse Agency. In 1979 he starred in a sketch comedy television series called Bonkers! with the Hudson Brothers, a job he hated. In the early 1970s he appeared on BBC Radio in Mostly Monkhouse with Josephine Tewson and David Jason.

A respected stand-up comedian, Monkhouse was known for his talent at ad-libbing. He became a much in demand after dinner speaker and wrote a book about the subject, Just Say A Few Words (Lennard Publishing, 1988, 1999).

In his later years, Monkhouse was probably better known for hosting television quiz shows than for being a comedian. One of his biggest successes was The Golden Shot from 1967 until 1972 and again in 1974. This was broadcast live for 52 weeks a year and drew up to 17 million viewers. His tenure ended with allegations, which he denied, that he had taken bribes to include branded goods on the programme as advertisements. He returned in 1974 after comedians Norman Vaughan and Charlie Williams were found wanting. The dozens of other shows Monkhouse presented included Celebrity Squares, Bob's Full House and Family Fortunes. Audiences regularly topped 15 million. In the late 1980s he hosted two series of the revival of the talent show Opportunity Knocks which aired as Bob Says Opportunity Knocks. He then moved to ITV to front two more game shows, Bob's Your Uncle and the $64,000 Dollar Question, neither of which were popular successes.

Between 1996 and 1998, Monkhouse presented the National Lottery show on Saturday evenings on BBC One for which he created the catchphrase: "I know I'm a sinner, but make me a winner!" The opening to each show would see him deliver several minutes of topical jokes, and on one occasion where his autocue failed, he improvised a new and topical routine. This talent was used in Bob Monkhouse On The Spot, a return to pure television comedy, in which audience members suggested topics and Monkhouse came up with a routine. Monkhouse returned to quizzes when he took over hosting duties on Wipeout from Paul Daniels, when its studio recordings moved from London to Manchester. Monkhouse hosted Wipeout between 1998 and 2002.

After being a stalwart of chat shows, in the mid-1980s Monkhouse presented his own for the BBC, The Bob Monkhouse Show. The show lasted two series and showcased comedians of every age. Monkhouse was criticised for sycophancy towards his guests but said that they were all heroes of his and that was how he really felt about them. Monkhouse was known as a keen supporter of new comedy and he used the show to introduce audiences to new comedians such as Kelly Monteith and Robin Williams. The format of the interviews varied between "true" chat and analysis of comedy, to scripted routines in which Monkhouse would willingly play the role of the guest's stooge as he did with Bob Hope. On one occasion the guest was the comedienne Pamela Stephenson who, after prior arrangement with the show's producer, appeared in a series of fake plaster casts, apparently the result of accidents whilst at home. During the interview she produced a handgun and fired it on several occasions, destroying a plant pot on the set and a series of lights in the studio roof. She then presented a rocket launcher which she promptly "fired" destroying a camera. The gun, launcher and camera were props. None of this was known to Monkhouse who appeared genuinely frightened (although the production crew were aware).

An expert on the history of silent cinema and a film collector, Monkhouse presented Mad Movies in 1966. He wrote, produced, financed and syndicated the show worldwide. The show featured clips from comic silent films, many from his own private collection, some of which he had helped to recover and restore. This film collection was the cause of a court case at the Old Bailey in 1979. Having loaned Terry Wogan's son a film, Monkhouse was charged with attempting to defraud film distributors of royalties, but after two years the judge decided that there was no case to answer. Many of the films in his collection were seized and destroyed (including what would have been the only surviving copies of some films).

In 2008, the British Film Institute was contacted by Monkhouse's daughter, Abigail, who asked if they would like to view the collection and provide some advice as to the best way of preserving it. Amongst the discoveries were many radio and TV shows long thought vanished. Dick Fiddy, the archivist, said "It's a huge, unwieldy collection which deals with a number of areas. It's not just film and TV. Initially, we found half a dozen TV shows that we knew to be missing."

Amongst those shows rediscovered were many that feature Monkhouse himself, including The Flip Side, a 1966 play in which he starred as a television DJ with his own late night show, and the 1958 series of his comedy My Pal Bob including an episode in which he is suspected of an extramarital affair.

The archive consisted of 36,000 videotapes, going back to when Monkhouse first bought a home video recorder in 1966 at a time when it cost more than a car. His film archive began in the late 1950s.

The entire Monkhouse film and television archive is now held by Kaleidoscope, including all the material previously held by the NFTVA. It was catalogued and restored to digital formats for a major event at Bafta on 24 October 2009. Chris Perry, of Kaleidoscope and Kaleidoscope Publishing, said: "We are painstakingly transferring the important contents of the video tapes and restoring radio shows. There are many incredible finds, and the event [is] an exciting time for all concerned."

In his final years, Monkhouse hosted a show on BBC Radio 2 called The Monkhouse Archive, in which he provided humorous links to clips of comedy acts spanning the previous 50 years.

Monkhouse became a favourite with impressionists, and, as his style fell out of favour in the 1980s, he was mocked for his slickness and accused of insincerity. He came back into fashion during the 1990s, and an appearance on Have I Got News For You restored his popularity. The British Comedy Awards handed him the Lifetime Achievement for Comedy gong in 1995. The Television and Radio Industries Club awarded him a Special Award for Outstanding Contribution to Broadcasting eight years later. He appeared on This Is Your Life in 1982 and then again on 23 April 2003, just eight months before his death. In a 2005 poll of fellow comedians and comedy insiders to find the Comedians' Comedian, Monkhouse was voted among the best 50 comedy acts.

Monkhouse was married twice; firstly to Elizabeth Thompson on 5 November 1949. The couple separated in 1967 and divorced in 1972. His second marriage was to Jacqueline Harding (b. 1936 d. in Barbados 28 March 2008) from 4 October 1973 until his death. He had three children from his first marriage, but only his adopted daughter Abigail survived him. His elder son Gary Alan, who had cerebral palsy, died in Braintree, Essex, in 1992, aged 40; Monkhouse was an avid campaigner for the disabled. His other son Simon, from whom he had been estranged for almost ten years, died aged 46 of a heroin overdose in a hotel in northern Thailand in May 2001.

Monkhouse lived in a house called Claridges at Eggington, near Leighton Buzzard, had a flat in London and a holiday home in Barbados.

For most of his career Monkhouse had jotted down jokes, odd facts, one-liners, sketches and ideas in a series of ring binders, which he took with him everywhere. In July 1995, they were stolen and Monkhouse offered a £15,000 reward. They were returned after 18 months, but the thief, although arrested, was never charged. On Monkhouse's death, the books were bequeathed to Colin Edmonds.

Monkhouse was a vocal supporter of the Conservative Party for some years. He later told his friend Colin Edmonds that this may have been a mistake but that he wanted to be associated with a winner and he knew Margaret Thatcher could not lose the 1987 General Election. He was appointed an OBE in 1993. He died of prostate cancer on 29 December 2003.

On 12 June 2007, Monkhouse posthumously appeared on British TV in an advertisement promoting awareness of prostate cancer for Male Cancer Awareness Week. Using computer animation techniques, Monkhouse was seen in a graveyard next to his own grave (though in reality he was cremated) talking about the disease seriously, interspersed with humorous asides to another camera ("What killed me kills one man per hour in Britain.

That's even more than my wife's cooking."). He ended by saying, "As a comedian, I've died many deaths. Prostate cancer, I don't recommend. I'd have paid good money to stay out of here. What's it worth to you?" before walking away from his grave and disappearing. The advertisement was made with the support of Monkhouse's estate and supported by poster campaigns, including award-winning panels displayed in London Underground trains. Money raised went to the Prostate Cancer Research Foundation.