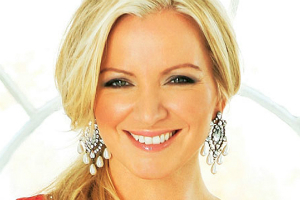 Michelle Georgina Mone OBE (born 7 October 1971) is a Scottish entrepreneur and former model. She is CEO of MJM Ltd., which owns the Ultimo brand.

Mone was born Michelle Georgina Allan in 1971, and grew up in the East End of Glasgow. She left school aged 15 to become a model, but this career came to an end after she became pregnant with her first child and married. She then got a marketing job with brewer Labatt, having entered fictional qualifications on her CV. Within two years, however, she had become their head of marketing in Scotland. After being made redundant by Labatt, Mone set up her own company. she decided, while wearing a very uncomfortable cleavage enhancing brassiere at a dinner dance, that she could create a better design. Her stated aims were to create a brassiere that was both more comfortable, and better looking, creating more cleavage. Mone had read about a new silicone product while on holiday in Florida, and obtained the European licence to make bras from it.

She founded MJM International Ltd in November 1996, and three years of research, design, and development resulted in the patented Ultimo bra. In August 1999, a month after having her third child, Mone launched Ultimo at Selfridges department store in London using hired actors playing Plastic Surgeons to "protest" that her new Bra would put them out of business, accompanied by a few models wearing her lingerie, all outside the store. Selfridges sold the pre-launch estimate of six weeks of stock within 24 hours, which is still known as the biggest ever bra launch in the UK, with over 50 photographers present and camera crews from all over the world.

The company was launched in the traditional ship building district of Glasgow, Govan, bringing needed jobs to an area which has experienced a long period of decline. In 2003, after returning from a trip to Los Angeles to visit Rod Stewart, Mone was assaulted, her BMW car-jacked and her prototype samples stolen. Her mobile phone was also taken, the phone included telephone numbers of a number of prominent figures including the then First Minister Jack McConnell. After the robbery Mone moved her company premises elsewhere.

In 2001 Prince Charles invited Mone to join the Board of Directors for The Princes Scottish Youth Business Trust, and more recently the Board of Main Council; "Michelle Mone is... the first assisted business to be invited to serve on the PSYBT Board." "MJM International Ltd is a company she set up... with a £5,000 loan from PSYBT"

Mone was a longstanding supporter of the Labour Party, but withdrew her support in 2009 and threatened to leave Britain if the top rate of income tax was increased. In January 2012, she gave an interview in The Sunday Times where she threatened to move to England if Scotland became an independent country after the proposed referendum in 2014. Mone "grew up a Scottish, Labour voting Protestant and is now a Conservative voting Catholic whom David Cameron invited to come and address his cabinet."

At 18 she became pregnant with her first child Rebecca, she then converted to Catholicism and married Michael an anesthetist's son from a Catholic family. Mone lives in Thorntonhall with her husband Michael and their three children: Rebecca 19; Declan, 15; and Bethany 11. On the 27 December 2011, lawyers announced the couple's formal separation. Despite their separation the couple continue to share their Thorntonhall mansion, residing in separate sections.