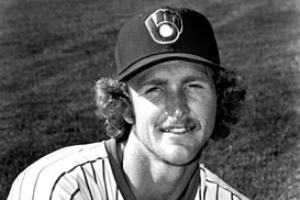 Paul Leo Molitor (born August 22, 1956), nicknamed "Molly" and "The Ignitor", is an American former Major League Baseball designated hitter and infielder. During his 21-year baseball career, he played for the Milwaukee Brewers (1978–1992), Toronto Blue Jays (1993–1995), and Minnesota Twins (1996–1998). In 2004, he was elected to the Hall of Fame in his first year of eligibility, becoming one of the first players who spent a significant portion of his career as a designated hitter to be enshrined. He was known for his exceptional hitting and speed.

High school, college and the minors

Molitor was born in Saint Paul, Minnesota. After graduating from Cretin-Derham Hall High School, he was selected in the 28th round of the 1974 free agent draft as a pitcher by the St. Louis Cardinals, but opted instead to attend college at the University of Minnesota. He was a three-year starter for the Golden Gophers, earning All American honors as a shortstop for his sophomore and junior years. After his junior year in college, he was selected third overall in the 1977 Major League Baseball Draft by the Milwaukee Brewers. He signed with the Brewers and began his professional career in Iowa, playing for the Class A Burlington Bees of the Midwest League.

Molitor played several positions during his career. He started out as a shortstop, then moved to second base when the briefly retired Robin Yount returned. Molitor then was moved to third base at the age of 25. During the latter half of his career, he was used primarily as a designated hitter, with occasional games at first base. He played 44% of his career games as a DH.

Molitor was part of a young Milwaukee Brewers team that lost the 1982 World Series in seven games to the St. Louis Cardinals. Molitor batted .355 during the series. In Game 1, he had five hits, a World Series record. During the 1982 season, he hit .302 and led the American League with 136 runs scored. Molitor also attracted national media attention in 1987 during his 39-game hitting streak, which ended with Molitor in the on-deck circle when Rick Manning got a game-ending hit to beat the Cleveland Indians on August 26, 1987. Fans booed Manning for driving in the winning run and thus depriving Molitor of one last chance to reach 40 games. The streak continues to stand as the fifth-longest in modern-day baseball history, and remains the longest since Pete Rose's 44-game hit streak in 1978. Although Molitor wanted to remain with Milwaukee when he became a free agent after the 1992 season, the franchise offered him a one year contract with a $900,000 pay cut (to $2.5 million), while the Toronto Blue Jays offered a three-year, $13 million ($21,000,000 in current dollar terms) deal, leading to his signing with the defending World Series champion Blue Jays.

Molitor quickly became an offensive juggernaut and was a key part of the Blue Jays' second World Championship. Molitor hit 2 doubles, two triples, and 2 home runs in the series earning the World Series MVP Award and tied a World Series record by batting .500 (12-for-24) in the six-game series. In 1993, Molitor led the AL in plate appearances, with 675, and hits (211).

In 1994, a strike-shortened season, Molitor led the AL in games played (115) and singles (107). He also stole 20 bases that season without ever being caught, one short of Kevin McReynolds' 1988 major league record of 21.

He left the Blue Jays after the 1995 season, and joined his hometown Minnesota Twins for the final three seasons of his career, where he acquired his 3,000th hit. He is the only player to reach the 3,000 hits plateau with a triple. Molitor was relishing the opportunity to play with Twins superstar Kirby Puckett, but Puckett developed career-ending glaucoma during spring training in 1996 and never played again. In 1996, Molitor became the second 40-year-old, after Hall of Famer Sam Rice, to have a 200-hit season, leading the league with 225, while also leading the league in singles with 167. Molitor also remains the last Major League player to drive in 100 or more runs in a season while hitting fewer than 10 home runs (9 HR, 113 RBIs). After retiring as a player, Molitor remained with the Twins as a bench coach for three seasons, and was considered a leading candidate to manage the team when Tom Kelly retired after the 2001 season, but declined in part because the Twins were still at the time being targeted for potential contraction. Molitor still remains relevant within the Twins organization.

Molitor's lifetime statistics include 2,683 games played, 1,782 runs scored, 3,319 hits, 234 home runs, 1,307 runs batted in, a .306 batting average, and 504 stolen bases. His 3,319 hits rank him ninth all-time. In addition, he batted .368 in five postseason series, and was an all-star seven times. Molitor recorded these statistics while missing nearly 500 games due to various injuries throughout his career.

On June 11, 1999, the Brewers retired Molitor's uniform number 4. During the ceremony at Milwaukee County Stadium, Molitor announced that if he went into the Hall of Fame, he would do so as a Brewer. On January 6, 2004, he was elected to the Hall in his first year of eligibility, with 85.2% of the votes. True to his word, he joined Robin Yount as the only Hall of Famers to be depicted on their plaques with Brewers caps. At the time of his induction, Molitor was the hitting coach for the Seattle Mariners.

In 1999, Molitor ranked No. 99 on The Sporting News' list of the 100 Greatest Baseball Players, and he was nominated as a finalist for the Major League Baseball All-Century Team. Molitor was elected to the Wisconsin Athletic Hall of Fame in 1999.

Molitor is one of four players in major league history with at least 3,000 hits, a .300 lifetime batting average, and 500 stolen bases. The other three are Ty Cobb, Honus Wagner, and Eddie Collins, none of whom played the game beyond 1930. Molitor is the only player ever to accomplish those feats and hit at least 200 home runs. Molitor is also the first player in World Series history to have at least two home runs, two doubles, and two triples in one series (1993).

During the early years of his career, Molitor began using cocaine and marijuana. He stopped using drugs in 1981, and has since visited schools to lecture about the dangers of drug use.