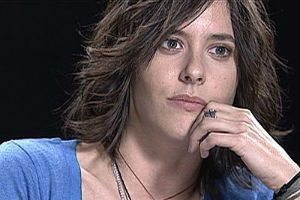 Katherine Sian Moennig (Pronounced meh-nig; born December 29, 1977) is an American actress best known for her role as Shane McCutcheon on The L Word, as well as Jake Pratt on Young Americans. In 2009, she starred as Dr. Miranda Foster on CBS Three Rivers.

Moennig was born in Philadelphia, Pennsylvania, to Broadway dancer Mary Zahn and violin maker William H. Moennig III. Moennig has a half-sister and a half-brother from the first marriage of her father. Moennig is also the half-niece of actress Blythe Danner (who is the half sister of Moennig's father) and the half-cousin of actress Gwyneth Paltrow and director Jake Paltrow. Moennig is of German, Scottish and Irish descent.

Moennig moved to New York City at the age of 18 to study at the American Academy of Dramatic Arts.

In 1999, she had the central role in the Our Lady Peace video "Is Anybody Home?". She also took a role in a Fleet Bank commercial, and appeared in a Red Cross Campaign benefitting victims of Hurricane Katrina.[citation needed] Moennig was a presenter at the 17th annual GLAAD awards and appeared at the 10th annual Ribbon of Hope Celebration.

On April 12, 2006, Moennig made her Off Broadway debut as "American Girl", opposite Lee Pace, in Guardians, by Peter Morris. The story is loosely based on that of Lynndie England.

In 2007, the documentary My Address: A Look At Gay Youth Homelessness in New York was launched with Moennig in cooperation with the Hetrick-Martin Institute (HMI), directed by Gigi Nicolas.

In 2009, Moennig joined the cast of the TV series Three Rivers. Moennig played Dr. Miranda Foster, a surgical fellow with a rebellious streak and fiery temper. On November 30, 2009, it was announced that CBS had pulled Three Rivers from the schedule, with no plans to return it.

In 2010, Moennig played a tattoo artist in the Dexter episode "First Blood".

In 2011, she played the small role of Gloria, a drug-addicted prostitute, in the film The Lincoln Lawyer.

In 2012, she played the role of a detective named Erica Lonsdale in the film Gone.