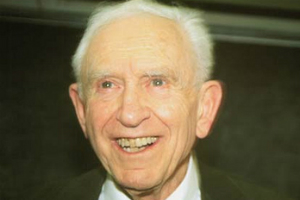 Franco Modigliani (June 18, 1918 – September 25, 2003) was an Italian economist naturalized American, a professor at the MIT Sloan School of Management and MIT Department of Economics who won the Nobel Memorial Prize in Economics in 1985.

Born in Rome, Modigliani left Italy in 1939 because of his Jewish origin and antifascist views. He first went to Paris with the family of his then-girlfriend, Serena, whom he married in 1939, and then to the United States. From 1942 to 1944, he taught at Columbia University and Bard College as an instructor in economics and statistics. In 1944, he obtained his D. Soc. Sci. from the New School for Social Research working under Jacob Marschak. In 1946, he became a naturalized citizen of the United States, and in 1948, he joined the University of Illinois at Urbana-Champaign faculty.

When he was a professor at the Graduate School of Industrial Administration of Carnegie Mellon University in the 1950s and early 1960s, Modigliani made two path-breaking contributions to economic science:

Along with Merton Miller, he formulated the important Modigliani–Miller theorem in corporate finance (1958). This theorem demonstrated that under certain assumptions, the value of a firm is not affected by whether it is financed by equity (selling shares) or debt (borrowing money).

He was also the originator of the life-cycle hypothesis, which attempts to explain the level of saving in the economy. Modigliani proposed that consumers would aim for a stable level of consumption throughout their lifetime, for example by saving during their working years and spending during their retirement.

In 1962, he joined the faculty at MIT, achieving distinction as an Institute Professor, where he stayed until his death. In 1985 he received MIT's James R. Killian Faculty Achievement Award.

Modigliani also co-authored the textbooks, "Foundations of Financial Markets and Institutions" and "Capital Markets: Institutions and Instruments" with Frank J. Fabozzi of Yale School of Management.

In the 1990s he teamed up with Francis Vitagliano to work on a new credit card, and he also helped to oppose changes to a patent law that would be harmful to inventors.

Modigliani was a trustee of the Economists for Peace and Security.

A collection of Modigliani's papers is housed at the Rubenstein Library at Duke University.