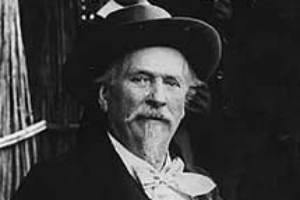 Mistral won the Nobel Prize in literature in 1904 and was a founding member of Félibrige and a member of l'Académie de Marseille. He was born in Maillane in the Bouches-du-Rhône département in southern France.

Mistral's fame was owing in part to Alphonse de Lamartine who sang his praises in the fortieth edition of his periodical "Cours familier de littérature", following the publication of Mistral's long poem Mirèio. He is the most revered writer in modern Occitan literature.

Alphonse Daudet, with whom he maintained a long friendship, devoted to the "Poet Mistral" one of his "Lettres de mon moulin", in an extremely eulogistic way.

Mistral was the son of wealthy landed farmers (François Mistral and Adelaide Poulinet, both of whom were related to the oldest families of Provence: Cruvelier, Expilly, Roux (originally Ruffo, from Calabria), themselves very closely related to each other; Marquis d'Aurel). Mistral was given the name "Frederi" in memory “of a poor small fellow who, at the time when my parents were courting, sweetly ran their errands of love, and who died shortly afterward of sunstroke.” Mistral did not begin school until he was about nine years, and quickly began to play hooky, leading his parents to send him to a boarding school in Saint-Michel-de-Frigolet, run by a Monsieur Donnat.

After receiving his bachelor's degree in Nîmes, Mistral studied law in Aix-en-Provence from 1848 to 1851. He became a champion for the independence of Provence, and in particular for restoring the “first literary language of civilized Europe” -- Provençal. He had studied the history of Provence during his time in Aix-en-Provence. Emancipated by his father, Mistral resolved: “to raise, revive in Provence the feeling of race ...; to move this rebirth by the restoration of the natural and historical language of the country ...; to restore the fashion to Provence by the breath and flame of divine poetry”. For Mistral, the word race designates “people linked by language, rooted in a country and in a story”.

For his lifelong efforts in restoring the language of Provence, Frédéric Mistral was one of the recipients of the 1904 Nobel Prize for Literature. The other winner that year, José Echegaray, was honored for his Spanish dramas. They each received one-half of the total prize money. Mistral devoted his winnings to the creation of the Museum at Arles, known locally as "Museon Arlaten". The museum is considered to be the most important collection of Provençal folk art, displaying furniture, costumes, ceramics, tools and farming implements.

In 1876, Mistral was married to a Burgundian woman, Marie-Louise Rivière (1857–1943) in Dijon Cathedral (Cathédrale Saint-Bénigne de Dijon). They had no children. The poet died on 25 March 1914 in Maillane, the same village where he was born.

Mistral joined forces with one of his teachers, Joseph Roumanille, and five other Provençal poets and on 21 May 1854, they founded Félibrige, a literary and cultural association, which made it possible to promote the Occitan language. Placed under the patronage of Saint Estelle, the movement also welcomed Catalan poets from Spain, driven out by Isabelle II.

The seven founders of the organization were (to use their Provençal names): Jóusè Roumaniho, Frederi Mistral, Teodor Aubanel, Ansèume Matiéu, Jan Brunet, Anfos Tavan and Paul Giera. Félibrige exists to this day, one of the few remaining cultural organizationas in 32 departments of the "Langue d'Oc".

Mistral is the author of Lou Tresor dóu Félibrige (1878–1886), which to date remains the most comprehensive dictionary of the Occitan language, and one of the most reliable for the precision of its definitions. It is a bilingual dictionary, Occitan-French, in two great volumes, with all of the dialects of oc, including mistralienne.

Mistral's most important work is Mirèio (Mireille), published in 1859, after eight years of creative effort. Mirèio, a long poem in Provençal consisting of twelve songs, tells of the thwarted love of Vincent and Mireille, two young Provençal people of different social means. The name Mireille (Mirèio in Provence) is a doublet of the word meraviho which means wonder.

Mistral uses the occasion not only to promote his language but also to share the culture of an area, speaking about, among other things, Saintes-Maries-de-la-Mer, where according to legend the dragon, Tarasque, was driven out, and of the famous and ancient Venus of Arles. Mistral prefaced his poem with a short notice about Provençal pronunciation. Occitan is unique among the Romance languages in having women's names ending in "o", rather than "a".

The poem tells how Mireille's parents wish her to marry a Provençal landowner, but she falls in love with a poor basket maker named Vincent, who loves her as well. After rejecting three rich suitors, a desperate Mireille, driven by the refusal of her parents to let her marry Vincent, runs off to Saintes-Maries-de-la-Mer to pray to the patrons of Provence to change her parents' minds. Having forgotten to bring a hat, she falls victim to the heat, dying in Vincent's arms under the gaze of her parents.

Mistral dedicated his book to Alphonse Lamartine as follows:

To you, I dedicate Mireille: It is my heart and my soul; It is the flower of my years; It is bunch of grapes from La Crau, leaves and all, a peasant's offering.”

Lamartine wrote enthusiastically: “I will tell you good news today! A great epic poet is born ... A true Homeric poet in our time; ... Yes, your epic poem is a masterpiece; ... the perfume of your book will not evaporate in a thousand years.”

Mirèio was translated into some fifteen European languages, including into French by Mistral himself. In 1863, Charles Gounod made it into an opera, Mireille.