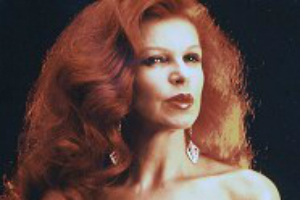 Italian singer, stage and film actress, and television personality, also known as La Rossa (Italian for "The Redhead"), due to the characteristic colour of her hair, and additionally as La Pantera di Goro ("The Panther of Goro"), which stemmed from the Italian press having nicknamed the three most popular Italian female singers of the 1960s, combining the names of animals and the singers' birth places.

The colour red also characterized her leftist political beliefs, claimed in numerous statements. Popular in Italy and abroad, she performed on musical and theatrical stages the world over, and received popular acclaim in her native Italy, and particularly in Germany, where she often participated in musical events and televised musical programmes. She also released numerous albums in France, Japan, Korea, Greece, Spain and South America.

Milva had a daughter, Martina, born during her marriage to Maurizio Corgnati in the early 1960s. She also dated film star Luigi Pistilli for four years; Pistilli's subsequent suicide was purported to be at least partly due to the ending of their relationship. Milva died on 24 April 2021 at age 81 in Milan.