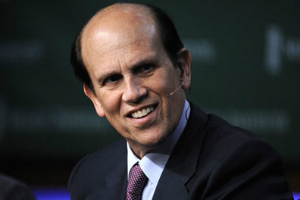 American stockbroker who made a fortune, $550 million in 1987 alone, through insider trading as a junk-bond king. A biography of his life has been written entitled "Highly Confident: The Crime And Punishment Of Michael Milken." In 1989 he was indicted on 98 counts of racketeering and securities fraud. In April 1990 he pleaded guilty to six felonies, including illegally concealing stock positions, helping clients evade income taxes and a conspiracy, involving secret record-keeping with stock speculator Ivan Boesky.

The man who came to personify the ruthlessness and greed of the '80s began serving his time in February 1991. In August 1992 Judge K.M. Wood reduced Milken's ten-year sentence to two years in a minimum-security work camp and, after 22 months in prison and one month in a half-way house, he was out on parole. By January 1993 he was once again living in his Encino home. He ended up paying a $200 million fine plus $400 million to the government for restitution, and he paid another $500 million to settle civil lawsuits.

Milken was a child prodigy, the rare one who was an intuitive genius who still applied himself. The first born, he was encouraged and pushed by his highly supportive parents, an accountant and a housewife. They produced an outgoing but straitlaced, aggressive but sentimental boy, the image of the 1950s sitcom family. The kids were taught the value of money, but to always help others in need. School was easy; he was not only a math whiz but a sports champion on the basketball team. His combination of brains, good manners, social awareness and enormous energy made Milken successful in every area of school life. He was prom king, wrote for the paper and participated in service organizations.

In 1975, tragedy struck when his son Gregory had his first seizure: epilepsy that eventually afflicted all three of his kids. Misdiagnosed and given spinal taps and antibiotics, the boy nearly died. When epilepsy was diagnosed a month later at another hospital, naturally Milken learned everything possible about the disability. The following year, his dad got cancer. In order to be close to his dad, Milken moved his family and entire department to Los Angeles.

On 2/23/1993 it was announced that he had developed prostate cancer, a fact discovered after his release from prison. With treatment, the cancer went into remission.

An idealist at heart, Milken never could stop helping people. With interests involved in education-related charities, his companies last year's donations amounted to $10 million. Knowledge Universe was launched with about $500 million in capital and had sales of more than $1 billion in 1997. His mission statement is simply to revolutionize learning and turn a profit. His company has been put on a short list of bidders for Simon & Schuster. Milken has predicted that this market will grow as quickly as health care with the explosion of school enrollments and the interest of both child and adult education. Simon & Schuster not only represent publication of educational books but also curriculum software.

During the last few weeks of his presidential term, Bill Clinton considered giving Milken a full pardon but the government's top securities-law officials and federal prosecutors strongly blocked the move, saying the "few people have done more than Milken to undermine public confidence in our markets."