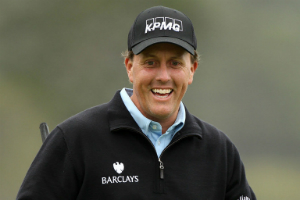 American professional golfer, winner of the 2004 and 2006 Masters tournaments, the Professional Golf Association Championship in 2005 and the U. S. Amateur tournament in 1990. He currently ranks second in the world, after Tiger Woods. Considered by many to be the best left-handed golfer the sport has even seen, he is equally known for his great victories and agonizing defeats.

Mickelson first swung a golf club (homemade) at age 18 months. While learning to golf he mirrored his father’s swing and developed a left-hand golf preference even though he does everything else right-handed. Today he stands 6’2”, his swing generates great power and he is known as one of the best short-game players. His junior career is also noteworthy: he won 34 San Diego County junior titles, three NCAA Championships at Arizona State and the U.S. Amateur title in 1990. His first professional win came in 1993, when he won twice.

Mickelson was born in San Diego and raised in both San Diego and Arizona. His father, Phil, was a Navy fighter pilot and later a commercial pilot. His mother, Mary, was a nurse and a former multiple Olympic Gold Medal winner on the U. S. Women’s Basketball team. Mickelson is the middle of three siblings. His older sister, Tina, is a PGA professional instructor and his younger brother, Tim, is the head golf coach at the University of San Diego.

Mickelson married Amy McBride on November 16, 1996 and they have three children: Amanda, born in 1999, Sophia, born in 2001 and Evan, born in 2003. He holds a degree in psychology from Arizona State University (1992) and is a licensed pilot with his own plane. Mickelson designs golf courses, loves flying and skiing. Unfortunately, he broke a leg while skiing in 1994.

While Mickelson has had somewhat of a love-hate relationship with his fans, his fellow PGA Tour golfers seem to see a most unflattering side of him. According to a February 2006 Gentlemen’s Quarterly magazine article and list of the “Ten Most Hated Athletes” he ranks number eight and his colleague’s nickname for him is “FIGJAM” which stands for “F**k, I’m good, just ask me.” In his book “A Good Walk Spoiled” noted author John Feinstein likens Mickelson’s personality to that of Eddie Haskell on the classic TV series “Leave It To Beaver” in that he is very polite on the surface, but is in fact quite egotistical and rather mean. However, in Mickelson’s defense, Sports Illustrated writer, Rick Reilly states “the whole family is like that…” (after meeting Phil’s sister Tina).

Personality issues aside, Mickelson remains one of the top modern golf greats having won The Players Championship on May 13, 2007, a first for him in that tournament. Noted golfer Tiger Woods and Mickelson both started their careers at about the same time and have been constant rivals ever since. In terms of world rankings, Tiger Woods is Number One by a wide margin, as of May 26, 2007, per “officialworldgolfrankings.com.” Mickelson served as the National Co-Chairman for the American Junior Golf Association and is a founder and spokesperson for “Birdies for the Brave”, a PGA TOUR Charities, Inc. web-based program to help fans honor and assist their military men and women.