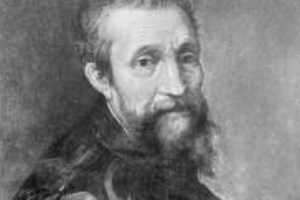 Italian Renaissance artist, sculptor, poet and architect, considered even today as the greatest figure in the history of art. Examples of his work include the ceiling of the Sistine Chapel in the Vatican, the architect of St. Peter's Basilica in Rome, and a host of other works such as the Pieta and the statue of David.

The son of an official, Michelangelo Buonarotti was sent at age 13 as a pupil to the Ghirlandaio brothers, who were noted artists. He painted his first picture in their studio. At 15, some of his early sculptures drew the attention of Lorenzo de Medici. Michelangelo went to live with Lorenzo, and during his two-year stay there, became acquainted with some of the leading Renaissance artists and writers.

In 1496, Michelangelo went to Rome, and over the next five years created the magnificent Pieta in St. Peter's Church, a sculpture of the dead Jesus in the arms of his mother Mary at the foot of the cross. After the creation of the Pieta, Michelangelo was considered the greatest sculptor of his day.

His statue of David, which established him as a master of human anatomy, was created from 1501 to 1504. It was the largest marble state to be carved in Italy since the end of the Roman Empire.

In 1508, he began what was to be his greatest painting. He had been ordered by Pope Julius II to decorate the ceiling of the Sistine Chapel in the Vatican. The painting took over four years to complete because he worked totally alone, most of the time on his back on a scaffolding. The painting shows different Biblical scenes.

Between 1536 and 1541, he painted the "Last Judgment" on the altar wall of the Sistine Chapel.

His final years were devoted to architecture. In 1546, he was appointed chief architect of St. Peter's Church in Rome, and designed its dome. He received no pay for this work, believing that it was his religious duty. He also devoted time to poetry in his later years.

Michelangelo was a short man with broad shoulders, piercing brown eyes and a broken nose. He lived frugally, sleeping beside his unfinished works. He suffered from kidney stones, stiff back and legs. He had a severe stroke in 1561, but continued with his projects regardless.

On 2/14/1564, Michelangelo suffered another stroke and was found wandering in the rain. Coaxed back to his house, he was still restless, and the following day he said he wanted his pony saddled so he could ride. He realized he was too weak to mount, returned to a chair, then slipped to the floor. On the afternoon of 2/18/1564 OS, he died, Rome, Italy.