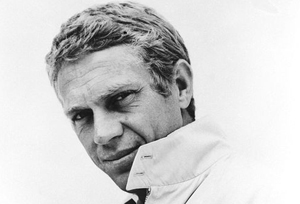 Steve McQueen (March 24, 1930 – November 7, 1980) was an Academy Award-nominated American movie actor, nicknamed "The King of Cool". He was one of the biggest box-office draws of the 1960s and 1970s due to a popular "anti-hero" persona. McQueen was combative with directors and producers; regardless, he was able to command large salaries and was in high demand.

After various live and filmed television guest appearances in the mid-1950s, McQueen gained both regular employment and his 'break-out' role with the Western series Wanted: Dead or Alive. Filmed at Apacheland Studio from 1958 to 1961, McQueen played Josh Randall, a bounty hunter who had been introduced the previous year in an episode of Trackdown, a TV western featuring Robert Culp. Randall carried a sawed-off Winchester rifle nicknamed the "Mare's Leg", in contrast to the standard six-gun carried by most heroes. This added to the anti-hero image of the character, infused with a combination of mystery, alienation and detachment, which made this show stand out from the typical TV Westerns.

Yul Brynner & Steve McQueen in The Magnificent SevenMcQueen moved into film in the mid-1950s with bit parts in Girl on the Run (1953) and Somebody Up There Likes Me (1956). He secured his first lead role in the 1958 horror movie The Blob. He then replaced Sammy Davis, Jr. in the Frank Sinatra vehicle Never So Few in 1959 when Sinatra quarrelled with Davis. Director John Sturges cast McQueen in his next movie, promising to "give him the camera". The Magnificent Seven (1960), with Yul Brynner, Robert Vaughn, Charles Bronson, and James Coburn, became McQueen's first major hit.

Steve McQueen as Captain Virgil HiltsMcQueen's next big film,1963's The Great Escape, told the fictionalized "true story" of a mass escape from a World War II POW camp. A spectacular motorcycle leap in the film's climax highlighted McQueen's role in the film. While a very accomplished motorcyclist, insurance reasons did not allow McQueen to perform the actual jump. His friend and fellow cycle enthusiast Bud Ekins, who resembled McQueen from a distance, actually made the jump. More information about this jump and the movie can be found by watching the special features documentary on The Great Escape DVD. Steve always gave Bud credit for performing the jump. In fact on his television show, when Johnny Carson had congratulated him for doing it, McQueen corrected him, "It wasn't me. That was Bud Ekins". Steve never tried to hide the truth about what he did or didn't do in his films. At the End of the Movie, He was called the "Cooler King."

Steve McQueen in BullittAnother successful film came in 1968 with Bullitt, with an unprecedented (and endlessly imitated) auto chase through San Francisco, with Bud Ekins again doubling for some of the more hazardous work. Prior to that, McQueen earned his only Academy Award nomination for the 1966 film The Sand Pebbles. McQueen also appeared in 1973's Papillon, the 1971 car race drama Le Mans, and in The Getaway in 1972.

McQueen was the world's highest paid actor by the time of The Getaway. After The Towering Inferno, co-starring with his long time friend and rival Paul Newman in 1974, McQueen did not return to film until 1978 with An Enemy of the People playing against type as an overweight, heavily bearded character, in this adaptation of the Henrik Ibsen play. The film was little seen and has never been released on Video or DVD, but is aired from time to time on PBS.

On August 31, 1973 he married his Getaway co-star, Ali MacGraw, with whom he had a passionate but tumultuous relationship (she left her husband, film producer Robert Evans for McQueen). They were divorced in 1978.

His third wife was model Barbara Minty who he married on January 16, 1980, less than a year before his death.

McQueen died at the age of 50, on November 7, 1980, in Ciudad Juárez, Chihuahua, Mexico of a heart attack following surgery to remove or reduce a metastatic tumour in his liver. He had been diagnosed with mesothelioma in December 1979, and had travelled to Mexico in July 1980 for unconventional treatment after his doctors advised him that they could do nothing more to prolong his life. Steve McQueen was cremated, and his ashes were spread in the Pacific Ocean.

Controversy arose over McQueen's Mexican trip, because McQueen sought a very non-traditional treatment that used coffee enemas and laetrile, a supposedly "natural" anti-cancer drug available in Mexico but not approved by the U.S. Food and Drug Administration.

Mesothelioma is a rare form of cancer usually caused by asbestos exposure. It is unclear whether the asbestos exposure came from his racing career or from his service in the United States Marine Corps; he wore an asbestos-insulated racer's suit in his race cars and when working on his own cars and motorbikes would use an asbestos soaked rag to cover his mouth from other fumes, and McQueen said that he was exposed to the deadly insulating material during his stint in the Marines.

In 1999, McQueen was posthumously inducted into the Motorcycle Hall of Fame.

Even posthumously, Steve McQueen remains one of the highest paid iconic stars, and his estate carefully manages the licensing activity to avoid the commercial oversaturation common to many deceased celebrities. McQueen's personality and trademark rights are managed by Corbis Corporation, the well-known media company owned by Bill Gates.