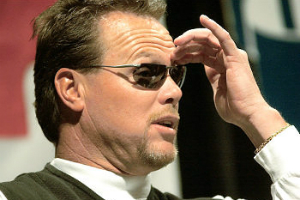 American football quarterback with the Chicago Bears, known for a fast ball and a fast mouth. His outrageous persona and trademark mirrored sunglasses delighted football fans and led to commercial pitchman jobs. Whether it was through his play or endorsements, he always conveyed a macho and hip image. He played college football for Brigham Young University from 1977 to 1981. In 1985, McMahon was named Professional Quarterback of the year. He led the Bears to a Super Bowl Victory in 1986. McMahon was inducted into the Hall of Fame in 1986 and in 1998, was inducted into the College Football Hall of Fame in Gary, Indiana.

McMahon grew up in San Jose, California, the son of an accountant. His history of continual injuries began at the age of six when he accidentally stabbed himself in the eye with a fork, leaving his pupil permanently dilated. For this reason he continually wears his sunglasses. When he was 16, the family moved to Roy, Utah. At 18, he entered Brigham Young University where he played excellent college football. Attending a school where students pledge not to drink was difficult for the quarterback who loved to party. McMahon's reputation for drinking beer and chewing tobacco earned him frequent discipline speeches from his football coach. Called "Jimbo" by his friends, McMahon was a Roman Catholic in a school of the Mormon faith. His difference in behavior made others stay clear of his influence.

In 1982, McMahon reported to the Chicago Bears training camp in a black limousine. His teammates expected an upstanding citizen filtered from a straight arrow school and instead, they met a rebel. He played football like an aggressive offensive lineman. While other quarterbacks avoid getting hit on the field, McMahon enjoyed butting heads with players. Chicago Bears coach, Mike Ditka, found Jimbo playing deaf to some of his calls on the sidelines. McMahon relished the aggressiveness of the sport and tried to fire up his teammates in the huddle.

His annual salary with the Bears was $700,000 and he also earned an estimated $3 million though commercials as he endorsed everything from Hondas to Miracle Whip. He did a "Mad Max" poster that sold about 300,000 and wrote a best-selling autobiography entitled "McMahon!"

McMahon seemed invincible until he separated his shoulder in September 1986. He had surgery but his future career in football at that point was questionable. He completed his career with the Bears in 1988 and in the following season, on 8/18/1989, was traded to San Diego where he played for the San Diego Chargers. In 1990-92, McMahon hustled the ball for the Philadelphia Eagles, and in 1993 he quarterbacked for the Minnesota Vikings. In 1995, he played for the Green Bay Packers, and in 1997 led the team to the Super Bowl Championship. After the games, the champ fueled up on junk food such Cheez Doodles, Ding Dongs, and fruit pies.

McMahon married his wife Nancy and the couple produced a daughter Ashley and son Sean. They lived in Northbrook, Illinois.