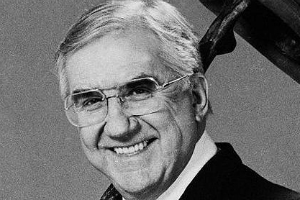 American actor, TV host and spokesman who hooked up with Johnny Carson on the daytime show "Who Do You Trust," 1957-62. He then began a 25-year run as co-host on "The Tonight Show Starring Johnny Carson." He also played on "Star Search" and "TV's Bloopers and Practical Jokes."

As a ten-year-old, Ed says he knew he wanted to be "in the business." He'd take a flashlight and talk into it like a microphone with his cocker spaniel sitting there listening to him. He'd do commercials, sport, weather, and the news. When he was about 17, he auditioned for an announcer on a local radio station in Lowell, MA. He was sure he was going to win, but he came in second to Ray Goulding. When Goulding moved on to Boston, the people at the station remembered McMahon had come in second and he was asked to take over Goulding's old job.

McMahon broke into TV in Philadelphia between missions of flying as a Marine fighter pilot in WWII and Korea. He was "Mr. Television" and he was "hot" but after he returned from being called back to Korea, all his shows had died. Tall, robust and affable. he started his show biz career as a clown on the circus show "Big Top," which aired on TV in 1950.-'51 and in 1953 he did a five-minute late-night TV spot called "Cold Opening." Then came a commercial for Cheer and being an announcer on "Who Do You Trust?," 1957-'62. In 1962 he started "The Tonight Show" with Johnny Carson, where he became the most famous second banana in America. He was with Johnny for four years before "The Tonight Show," making a total of 34 years they were together. "I miss the free-for-all when you didn't know what he was going to bring up. I never went to a meeting. Never read a note, I just showed up. That stuff you saw us do was all ad-lib banter." McMahon left the show just before Johnny retired in March 1992.

Other TV shows include being host of the series "Whodunnit?" 1979 and beginning in 1983, host of "Star Search."

Married to Alyce Ferrell, 1944-76, they had four kids. Because of his busy schedule he was something of an absentee husband and father. His second marriage was to former flight attendant, Victoria Valentine, 1976-89, with whom he adopted daughter Katherine Mary in 1985. It ended in a messy divorce that drew racy headlines and juicy stories about McMahon hiring a detective to follow her, phone bugging and allegations of Victoria's affair. On 22 February 1992, he married advertising executive, 38-year-old Pam Hurn.

As he grew older, McMahon still hosted numerous specials including TV's "Bloopers, Commercials and Practical Jokes." He endured financial problems toward the end of his life, nearly losing his hometo foreclosure in June 2008. He cited poor investment choices, divorces and living beyond his means as the causes.

McMahon died at age 86 "shortly after midnight" on 23 June 2009 in a Los Angeles hospital (approximate time from news reports). He had been suffering from bone cancer, pneumonia and other health problems.