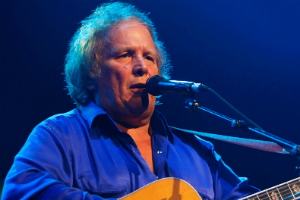 American musician, a singer, songwriter and guitarist of folk rock who achieved his greatest success in the '70s as a soloist. Pete Seeger, with whom he worked, rated him "the finest singer and songwriter I've met since Bob Dylan." His work includes the songs "American Pie" and "Vincent," both produced in 1972. His first album "Tapestry," was released in 1970 and, although he was never a superstar, he was consistently affable in delivery, easy and warm.

Don was born to a 42-year-old mom and his 15-year-old sister was like a second mother. When he was 15, his dad died. In spite of no musical background, he could sing when he was a year old and always had a passion for sound. As a kid, he was short and stocky with long brown hair, a sickly asthmatic who was quietly rebellious.

A loner, he spent his time on guitar and banjo. He had a dream that became an avowed aim, to build a catalog of songs about the American condition. Playing in schoolboy groups, he settled on the acoustical guitar and he hitchhiked up and down the East Coast to play gigs in folk music clubs, schools, cafes - wherever he could find an audience. While in college he began performing summers in Saratoga Springs, N.Y., 1966. From there he became the Hudson River Troubadour, performing in 56 towns along the Hudson River. It was there that he was heard by Pete Seeger whom he joined on a cruise up the Hudson, giving concerts.

He began to appear at folk and rock festivals, leading to his first album, "Tapestry." In 1971 he wrote "American Pie," with which he rocketed to fame the following year. Short, stocky and boyish, he wears rimless glasses off-stage along with blue jeans. He often works in ecology causes though he does not classify himself as political.