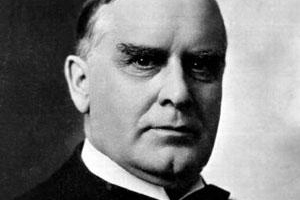 McKinley was the seventh of nine kids of a Scotch-Irish family that settled in western Pennsylvania after the American Revolution. His grandfather had served as a private in that war. At age 18 he enlisted as a private in the 23rd Ohio Volunteer Infantry and fought with it throughout the war. He mustered out in 1865 having distinguished himself at South Mountain, Antietam, Winchester and Cedar Creek among less famous battles.

His political life was a steady, unforced advancement through increasing levels of power and responsibility. In 1869 he served as a county prosecutor and argued for Negro suffrage, a radical position at the time. He became a congressman in 1876, chairman of the House Ways and Means Committee, 1889; and governor of Ohio, 1891-1895. Elected president in 1897, he was an astute, shrewd politician who resisted going to war with Spain until it became clear that the Congress would declare war whether he wanted to or not. Shortly after his reelection in 1900 McKinley, a Union veteran, made a speaking tour of the Old Confederacy that many thought signaled reconciliation between the once-warring regions. In less than five years as president he won a war that added Puerto Rico, Guam and the Philippines to the U.S. and liberated Cuba from Spain. His conduct and utterances in his last days revealed a loftiness of personal character that everywhere elicited admiration and praise.

Hi wife, Ida, was mentally ill throughout their lives together. McKinley, a devout Methodist, not only cared for her personally but saw to it that she was included in the social life of the White House.

While attending the Pan-American Exposition in Buffalo, NY on 9/6/1901 McKinley was shot in the Temple of Music amid guards and perhaps 50 policemen and soldiers. No one noticed a young, fair-haired Leon Czolgosz with his right hand in his pocket as he moved slowly forward to greet the president. Withdrawing his hand he fired a short-barreled .32 caliber Iver Johnson revolver twice in quick succession. McKinley shuddered and stared at his murderer in astonishment murmuring "Cortelyou" ( his secretary's name) and fell into the arms of a guard. Czolgosz was thrown to the floor and attacked by a dozen people before he was dragged away. McKinley was taken to a small exposition hospital where he was operated on by Mathew D. Mann, a Buffalo gynecologist. The anterior and posterior walls of the stomach were sutured, but the bullet, which passed through, could not be retrieved. The other shot had struck the breastbone without penetrating. He was taken to the home of the exposition's director where his condition remained stable for some days. Late on Thursday his pulse rate jumped and grew weaker; at 10:00 PM on Friday he lost consciousness and died at 2:15 a.m. on 9/14/1901. An autopsy revealed that his pancreas was largely destroyed and was probably the cause of death.