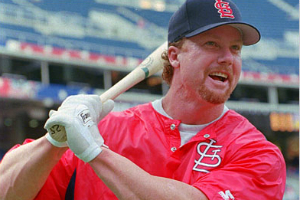 He is the player who first broke records on 9/08/1998, Chicago, by hitting his 62nd home run this season, matching Roger Maris' 37-year record. Babe Ruth's former record was 60 in a season. To the wild jubilation of his fans, including his dad who was celebrating his 61st birthday, he hoisted his ten-year-old son Matthew high in the air.

The season was not over. The Cub's Sammy Sosa hit home runs No.61 and No. 62 in the same game on 9/14/1998, connecting twice against the Milwaukee Brewers to lead the Chicago Cubs to an 11-10 victory on a wild afternoon in Wrigley Field. It turned out to be a rousing great race with baseball fans hanging on to every broadcast.

On 9/27/1998, the 6' 5", 250-lb McGwire pulled ahead with his incredible 69th and 70th homers in his last game of the season for a grand finale. Both men were wildly applauded for not only setting records, but doing so with grace and style.

McGwire's humility and shyness are refreshing in a sport that has gained a bad rap for some years due to the actions of spoiled, hostile athletes. Last September, he astonished reporters by breaking into tears while discussing a charity he'd established to help abused children, to which he pledged $1 million a year from his three-year, $28.5 million contract.

One of five sons raised by dentist John McGwire and his wife, Ginger, in Claremont, California, McGwire was a model of good behavior as a high school baseball star, never late for practice or behind in his studies.

During his first season with the Oakland A's, McGwire seemed to lose his way. On the field, he was outstanding, hitting 49 home runs and winning the American League Rookie of the Year Award., but there was trouble on the home front. His three-year marriage to Kathy was faltering. Matt was born in 1987, but the couple separated a year later. After eight years of growing into his new big boots as a baseball star, McGwire reestablished his priorities and solid sense of values. Off-season, he lives within five minutes of his ex-wife and her husband, with whom he is friends, and spends whatever time he can with Matt, whom he adores.

Traded to the Cardinals late in the 1997 season, he finished with 58 home runs. He's had to learn to live with fan support and media suffocation. Kids mob him in the parking lot for autographs and people come to batting practice to see him perform. He does next to none of one-on-one interviews, turning down TV customarily. As much as he loves breaking records, his first hope is to be known as a great dad.

On 11/11/2001, McGwire announced that he will retire from the game this coming season due to ongoing injuries.