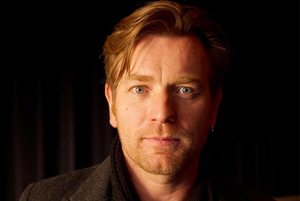 Ewan Gordon McGregor (born March 31, 1971) is a Scottish actor who has had significant success in mainstream, indie and art house films. He is ranked #36 in Empire magazine's "The Top 100 Movie Stars of All Time" list.

McGregor was born in Crieff, Scotland to James McGregor, a retired dormer school teacher, and Carole (née Lawson), also a teacher. His mother is the sister of actor Denis Lawson, the sister-in-law of the late actress Sheila Gish, and the aunt of Lou Gish. McGregor attended Guildhall School of Music and Drama in 1988 to study drama. Six months before graduating, he won a leading role in Dennis Potter’s six-part BBC series Lipstick on Your Collar, and has been working steadily ever since. He made his feature film debut in 1993 in Bill Forsyth’s Being Human. The following year, he earned widespread praise and won an Empire Award for his performance in the thriller Shallow Grave, which marked his first collaboration with director Danny Boyle. His major international breakthrough soon followed with the role of heroin addict Mark Renton in Boyle's film version of Irvine Welsh's Trainspotting (1996).

Leading man
McGregor has been featured as the male romantic lead in Hollywood films such as Moulin Rouge and Down With Love, and in the British film Little Voice. He received excellent reviews for his performance as an amoral drifter mixed up in murder in the rather bleak British film Young Adam (2003), which co-starred the acclaimed British actress Tilda Swinton.

He took on the role of a younger Obi-Wan Kenobi in the Star Wars prequel trilogy, originally made famous by Sir Alec Guinness in the original Star Wars films. McGregor took very special care (especially Episode III) of his portrayal of Kenobi to ensure that Obi-Wan's mannerisms, speech timings, and accents closely resemble Obi-Wan's "Alec Guinness Self". He was in fact continuing a family tradtition with his being cast in Star Wars that was started when his uncle had played Wedge Antilles in the previous Star Wars prequel trilogy films.

McGregor is one of the few major male actors to repeatedly do full-frontal nudity in many of his films, including Trainspotting, Velvet Goldmine, The Pillow Book, and Young Adam. He also played gay or bisexual characters in two of these (Peter Greenaway's The Pillow Book (1996) and Todd Haynes's Velvet Goldmine (1998)).

In 2005, the actor lent his vocal talent to two successful animated features. McGregor provided the voice of the lovable robot "Rodney Copperbottom" in Robots, which also featured the voices of Halle Berry and Robin Williams. He then voiced the lead character in Gary Chapman's Valiant alongside Jim Broadbent and John Cleese. Additionally in 2005, McGregor played two roles (one a clone of the other) opposite Scarlett Johansson in Michael Bay's The Island and then appeared in Marc Forster's Stay, a psychological thriller co-starring Naomi Watts and Ryan Gosling. Both films, though interesting choices, were considered box office flops in America and received negative reviews from critics.

McGregor has narrated the STV show JetSet, a Scottish series following the lives of student pilots and navigators at RAF Lossiemouth as they undergo a gruelling six-month course learning to fly the Tornado GR4 — the RAF's primary attack aircraft. In theatre, he starred alongside Jane Krakowski, Douglas Hodge and Jenna Russell in the original Donmar Warehouse production of Guys and Dolls in London at the Piccadilly Theatre. He played the leading role of Sky Masterson, made famous by Marlon Brando in the movie, to much critical acclaim, and he received the LastMinute.com award for Best Actor in 2005. He was also nominated for an Olivier Award for Best Actor in a Musical.

McGregor is next set to appear opposite Irish star Colin Farrell in Cassandra's Dream and will co-star with Daniel Craig in Dan Harris' upcoming film of Glen Duncan's novel I, Lucifer.