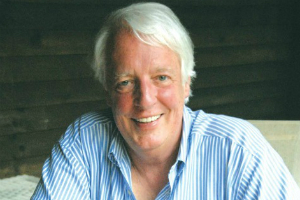 Joe McGinniss (born 1942) is an American author of nonfiction and novels. He first came to prominence with the best-selling The Selling of the President, 1968 which described the marketing of then-presidential candidate Richard Nixon, and has authored 11 works since that time. His latest book is The Rogue: Searching for the Real Sarah Palin.

McGinniss graduated from the College of the Holy Cross in 1964 and became a general assignment reporter at the Worcester Telegram in Worcester, Massachusetts. Within a year he left to become a sportswriter for The Philadelphia Bulletin. He then moved to The Philadelphia Inquirer as a general interest columnist.

The Selling of the President

McGinniss became an overnight success when his first book, The Selling of the President 1968, landed on The New York Times bestseller list when he was 26 years old, making him the youngest living writer with that achievement. The book described the marketing of Richard Nixon during the 1968 presidential campaign. McGinniss stumbled across his book’s topic while taking a train to New York. A fellow commuter had just landed the Hubert Humphrey account and was boasting that 'in six weeks we’ll have him looking better than Abraham Lincoln.' McGinniss tried to get access to Humphrey’s campaign first, but they turned him down. So he called up Nixon’s, and they said yes."

The book was well received by both critics and the public, and has been recognized as a "classic of campaign reporting that first introduced many readers to the stage-managed world of political theater." It "spent more than six months on best-sellers lists, and McGinniss sold a lot of those books through television, appearing on the titular shows of Merv Griffin, David Frost and Dick Cavett, among others." Conservative writer William F. Buckley "assumed McGinniss had relied on 'an elaborate deception which has brought joy and hope to the Nixon-haters.' But even Buckley liked the book."

After the success of his book in 1968, McGinniss left the Inquirer to write books full-time. He next wrote a novel, The Dream Team. It was followed by Heroes, and Going to Extremes, a nonfiction account of his year exploring Alaska.

In 1979 he became a writer-in-residence at the L.A. Herald Examiner. Next came the McGinniss trilogy of true crime books, Fatal Vision, Blind Faith and Cruel Doubt. All three books were made into TV miniseries. His 1983 account of the Jeffrey MacDonald murder case, Fatal Vision, was a best-seller. MacDonald sued McGinniss in 1984, alleging that McGinniss pretended to believe MacDonald innocent after he came to the conclusion that MacDonald was guilty, in order to continue MacDonald's cooperation with him. After a six-week civil trial that resulted in a hung jury, McGinniss's publisher's insurance company chose to settle out of court with MacDonald for $325,000. There was a later book about the MacDonald case by Jerry Allen Potter and Fred Bost called Fatal Justice that was a counterattack to Fatal Vision. Potter and Bost professed that MacDonald was innocent and that McGinniss's book was wildly inaccurate. They pointed to various parts of the book they claimed were untrue. For example, McGinnis proposed a theory that MacDonald killed his wife and children during a psychotic episode brought on by his use of diet pills. At the trial, McGinnis was forced to admit under oath that he had no hard evidence to support this theory and it may not have happened at all.  Judge Ross split the money between Mildred Kassab and Dorothy MacDonald, the MacDonald lawyers, with Jeffrey MacDonald being allowed to keep the rest. Neither side filed an appeal Judge Ross likened McGinniss's conduct to that of "a thief in the night," then he corrected himself, saying, "I guess a thief in the night wouldn't see you. He is more of a con man than he is a thief" In her book The Journalist and the Murderer, Janet Malcolm used the McGinniss-MacDonald trial to explore the problematic relationship between journalists and their subjects.

The Last Brother: The Rise and Fall of Teddy Kennedy was published in 1993. The highly speculative volume was widely panned; The New York Times called it "half-baked" and "awful".

In 1995, McGinniss sat through the O.J. Simpson murder case, expecting to write a book about it, but he returned the $1 million advance after Simpson was acquitted, saying the trial had been "a farce."

His next book, the critically acclaimed The Miracle of Castel di Sangro, followed the fortunes of an Italian soccer team from a tiny town during one dramatic season in the big leagues.

The Big Horse was published in 2004. In his next book, Never Enough, McGinniss returned to his study of the dark side of the American family with a nonfiction account of the murder of investment banker Robert Kissel by his wife Nancy in Hong Kong.

The Rogue: Searching for the Real Sarah Palin

McGinniss returned to the subject of Alaska in 2008 to research an article for Conde Nast's business magazine Portfolio about then-governor Palin's promotion of a $26 billion plan to construct a natural gas pipeline from the North Slope of Alaska to a pipeline hub in Canada. In 2009, McGinniss signed a contract to write an unauthorized biography about Palin and began research which took him to Alaska that fall and again in the spring of 2010. In late May he rented a house next door to Palin's home on Lake Lucille in Wasilla. On her Facebook page, Palin warned him to stay away from her children and stated: "Wonder what kind of material he'll gather while overlooking Piper's bedroom, my little garden, and the family's swimming hole?" causing a brief media frenzy and, according to The Washington Post, "fury from Palin fans". McGinniss responded that there was no view of anyone's bedroom from the rental house and suggested that Palin should have simply come over with a plate of cookies and had a civil discussion with him.

McGinniss left Alaska in September 2010 to write his book on the Palin phenomenon. Broadway Books, a division of Random House, published The Rogue: Searching for the Real Sarah Palin on September 20, 2011. According to advance reviews, the book alleges premarital sex and drug use. The book is reportedly heavy on innuendo, including conjecture that Sarah Palin is not the biological mother of her son, Trig Palin. Early reviews by the Los Angeles Times and The New York Times criticized The Rogue for its use of unnamed sources and for having an obvious anti-Palin agenda.

On September 26, 2011, ABC News reported that Palin's attorney John Tiemessen had written a letter to the book's author and publisher, saying that Palin might sue them "for knowingly publishing false statements."