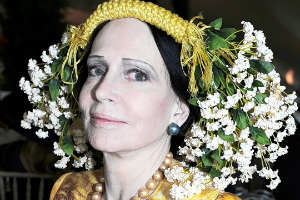 McFadden is the only daughter of Alexander Bloomfield McFadden, a cotton broker, and her mother was the former Mary Josephine Cutting, a socialite and concert pianist. Her father died in 1948, when he was killed in an avalanche while climbing in the Rocky Mountains. She is a descendant of Robert Fulton, the steamboat pioneer.

She has two brothers, George, who died in April 2008 after a plane he was on crashed into Toledo Bend Reservoir,Texas, and John McFadden, and two half-brothers, Watson B. and Wolcott R. Blair.

After graduating from Greenvale and Foxcroft, McFadden studied at the École Lubec, 1955–56 and at the Sorbonne, 1956-57. She also studied fashion at the Traphagen School of Design in 1956 and sociology at Columbia University and at the New School for Social Research, New York, 1958-60. She also attended the Dante Alighieri Institute in Rome.

Since then she has received many honors including the President's Fellows Award of the Rhode Island School of Design and has served as President of the Council of Fashion Designers of America. McFadden's collections have been shown on runways in New York, Paris, Rome, Milan, and Tokyo. McFadden won a Coty Award in 1976 and entered the Coty Hall of Fame in 1979.

McFadden has been married to:

In 2009, a person close to the family disclosed that McFadden is not engaged, but is dating Marquette de Bary.