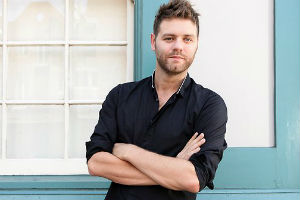 Brian Nicholas McFadden (born 12 April 1980) is an Irish singer-songwriter who rose to fame in the late 1990s as a member of the Irish boyband Westlife. He is now a judge on Australia's Got Talent.

Following his departure from Westlife, McFadden released his debut solo album, Irish Son which peaked within the top 5 on both the Danish and Irish Albums Charts, and produced his first two No. 1 solo singles "Real to Me" in four European countrie] and also "Almost Here", a duet with his now ex-fiancée Delta Goodrem which gained a platinum accreditation in Australia. "Like Only a Woman Can", the lead single from his second album, Set in Stone (2008), became his third No. 1 single as a solo artist. In 2010, McFadden scored his fourth No. 1 with the hit single, "Just Say So" featuring American rapper, Kevin Rudolf and gained his second Australian platinum accreditation. The single received a nomination at the 2010 ARIA Music Awards for Most Popular Australian Single.

McFadden was born in Dublin, Ireland and was raised Catholic] Throughout his younger years, he always had an interest in singing, dancing and football.  Along with his sister Susan, McFadden attended the Billie Barry Stage School in Dublin,  which led him to doing stage and TV roles, including a role in the Irish TV show Finbar's Class, a comedy revolving around a group of student-swingers.

In early 1998, he formed a pop-R&B group with his friends, Tim and Darragh called Cartel, and performed live gigs in Dublin pubs.

In June 1998, McFadden auditioned for the new Irish male band (at the time), Westlife with Nicky Byrne and eventually both joined the group alongside Kian Egan, Mark Feehily and Shane Filan. After joining, he changed the spelling of his name Brian to Bryan to make it easier to sign autographs. With McFadden as part of the group, Westlife released four Irish No. 1 studio albums and a No. 1 greatest hits album. They also released seventeen Irish top 5 singles including the hit single, "Uptown Girl" which peaked within the top 10 in seven European countries and also in Australia and New Zealand. In March 2004, McFadden left the group to spend more time with his family and work on solo projects. He subsequently began a solo career and decided to revert the spelling of his first name back to its original, 'Brian'. Before launching his solo career he co-wrote the song "If My World Stopped Turning" which was sung by Ireland's entry Chris Doran in the Eurovision Song Contest 2004.

Following his departure from Westlife, McFadden signed to major record label, Sony BMG. In September 2004, he released his debut solo single "Real to Me", which became his first solo No. 1 single in Britain, Ireland, Denmark and Norway. His second single and title track, "Irish Son" peaked within the top 10 on the British and Ireland Singles Charts. Following the release of the two singles, McFadden released his debut solo album, Irish Son in November 2004 and peaked within the top 10 on the Irish Albums Chart. McFadden co-wrote most of the songs on the album with Guy Chambers, best known for his successful collaboration with Robbie Williams and INXS. The third single "Almost Here", a duet with Australian singer Delta Goodrem became McFadden's second No. 1 single in Ireland as a solo artist and his first in Australia and gained a platinum accreditation there. The fourth and final single, "Demons" peaked within the top 30 on the charts in Ireland and Britain. McFadden continued writing songs for artists such as, Il Divo and Girls Aloud, as well as co-writing the theme song "Together We Are One" for the 2006 Commonwealth Games. That same year, McFadden collaborated with American singer LeAnn Rimes on the song, "Everybody's Someone".

While working on the second album, McFadden's record label, Sony BMG insisted that he work with an A&R man, after a disappointing amount of sales in his last album, which only sold 800,000 copies worldwide. However, there were claims that McFadden's A&R man did not want McFadden to work with Guy Chambers, who had previously worked with McFadden on his last album and fought about his songs and musical direction. His A&R man wanted him to make songs like James Morrison, Paolo Nutini and the Scissor Sisters but McFadden insisted he make songs that are of his style. It was later revealed in March 2007 that McFadden parted ways with Sony BMG. Later that year, he set up his own record label under the name of BMF Records and released his new single "Like Only a Woman Can" in Ireland, through the label. "Like Only a Woman Can" became his third Irish No. 1 single as a solo artist. In early 2008, McFadden signed to Universal Music Australia] and released the single there in April 2008, which peaked within the ARIA top 15. Following the release of "Like Only a Woman Can", McFadden released his second studio album, Set in Stone. The album peaked in Australia at No. 5 on the ARIA Albums Chart. Other singles released from the album, "Twisted", peaked within the top 30 on the ARIA Singles Chart and "Everything But You" failed to chart the ARIA top 50.

In April 2010, McFadden released "Just Say So", which features American rapper Kevin Rudolf. The single debuted on the ARIA Singles Chart at No. 1 and stayed there for three weeks. It spent seven weeks in the ARIA top ten and thirteen weeks in the ARIA top 50 and gained a platinum accreditation. Following the release of "Just Say So", McFadden release his third studio album, Wall of Soundz in Australia on 23 April 2010. The album was originally going to be released as a side-project McFadden embarked on with American songwriter Rob Conley but both decided to release it as McFadden's third solo album. It debuted at No. 27 on the ARIA Albums Chart and spent only three weeks in the ARIA top 50. "Chemical Rush" was the second single released from the album in June 2010 and peaked at No. 12 on the charts] In September 2010, McFadden released the third single titled, "Mistakes", a duet with his then fiancé Delta Goodrem. Brian also recorded a duet with Ronan Keating on Ronan's duet album, a cover of Bee Gees' To Love Somebody.

In June 2011, McFadden appeared on Australian radio show The Kyle & Jackie O Show to launch both of his brand new singles Come Party and That's How Life Goes which was co-written by multi-platinum singer, songwriter and producer Ray Ruffin. Despite heavy promotion and appearances on TV shows like Dancing With the Stars the new singles have failed to impact the charts at all, which is surprising considering his high profile appearances on Australia's Got Talent. Some of this has been attributed to the negative press surrounding his previous single "Just the Way You Are (Drunk at the Bar)" . This, as well as his much-publicized split with Delta Goodrem, appear to have had a negative impact on his music career. There is speculation that the release of his fourth album may be put on hold.

McFadden released his new single "Wrap My Arms" on 20 January 2012 in Australia. The song was used in a Promo for Home and Away and it managed to peak at 70 in the ARIA top 100. On 6 September 2012, McFadden took part in a brand new Irish Television show, The Hit, in the show both McFadden and band Royseven both sang songs from two Irish Writers which would be put on iTunes after the show aired and the one which the highest position won. McFaddens song, Invisible was his first international single release since 2005.

On 13 September 2012, McFadden announced the release of his fourth studio album, The Irish Connection. The Album will feature covers of his favourite Irish songs as well as duets with Ronan Keating and Sinéad O'Connor, The album was recorded in both Sydney and Dublin but will currently only be released in Australia. This album features none of McFaddens past five single releases which don't appear on an Album format to date.

On 18 September 2012 Ronan Keating announced that McFadden would be joining him on his 2013 UK Fires Tour.  This will be McFadden's first UK appearance in seven years.

In 2008, McFadden took on the role of television presenter as co-host of FOX8's Football Superstar in Australia. He reprised his role for the second season in 2009. In August 2009, McFadden appeared as a guest judge on Australian Idol.

In 2010, McFadden became one of the new judges on Australia's Got Talent alongside Kyle Sandilands and Dannii Minogue. He has been a Judge for three seasons, it has been widely reported that he may not return for the Show's 7th series.

In late 2008, McFadden teamed up with singer Ricki-Lee Coulter and former Big Brother host Mike Goldman to present the Summer Breakfast Show on 2Day FM. In September 2009, McFadden returned to radio by co-hosting on the breakfast show on 2dayFM with Jackie O and Andrew G, replacing host Kyle Sandilands for a short period of time.

Katona and McFadden announced their separation in September 2004 and their divorce was finalised in December 2006. In 2004, McFadden began dating Australian singer and actress Delta Goodrem, with whom he collaborated on the duet "Almost Here". On 29 November 2007, McFadden announced his engagement to Goodrem. In his book, McFadden wrote that he proposed to her on a trip to Bali. On 1 April 2011, McFadden and Goodrem released a joint statement announcing that they had broken up, and that their engagement had been called off. In the statement they stated that they wished each other every success and happiness in the future. Since May 2011, he has been together with Irish DJ and reality star Vogue Williams and their engagement was announced on 12 January 2012. They were married on 2 September 2012 in Florence, Italy.

In August 2008, GayNZ.com drew attention to a number of disparaging remarks about gays and lesbians McFadden made while he co-hosted the breakfast show on More FM in Auckland, New Zealand stating,

Saying pink is a form of red is the same as saying homosexual is a form of male. In the old days there was no such thing as gay. It was frowned upon. The church would burn you at the stake. Modern day, if you are not gay, a man should not be wearing pink. Unless of course you're in the Americas Cup and you're one of these pansies who walk around with Gant t-shirts with your collars up, and you wear pink and you wear white trousers with those dirty brown slip-on shoes. Then you're just an idiot.

McFadden's comments made headlines in news reports, gossip websites and weblogs worldwide, provoking considerable condemnation from the LGBT community. He later denied he was homophobic, saying through his publicist that his comments had been "taken out of context".