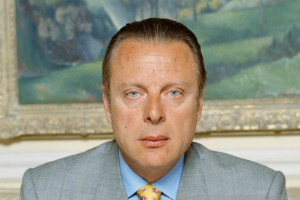 Italian-American industrialist who made his millions by designing towns and highways in Africa and the Middle East, Saudi Arabia and the UK. Based in Rome, Mazzucchelli was a consulting engineer who managed his family's ASCO engineering firm for 25 years.

In 1993, he gave it up to become a partner with his wife in her business, the House of Ivana. He oversees production of the clothing, jewelry and skin-care products sold on the Home Shopping Network.

His first marriage ended in 1986 after 20 years. Mazzucchelli met Ivana Trump, who was recently separated from business tycoon Donald Trump, through a mutual friend in 1991. He proposed to her in 1992 but she told him she wasn't ready yet. He proposed again in late 1994 and she accepted on 9/27/1994. Her engagement ring was a flawless oval Burmese sapphire flanked by heart-shaped diamonds. They married on 11/29/l995 at 7:30 P.M. EST, Manhattan, NY. From their former marriages, he has a son, Fidele, and she has three kids: Donald Jr., Ivanka, and Eric.

The union fizzled after 20 months. She brought a lawsuit against Riccardo in July 1997, for violating a prenuptial agreement by blabbing to a tabloid about their marital problems and separation. The lawsuit seeks $15 million in compensation for damages to her reputation and business ventures.