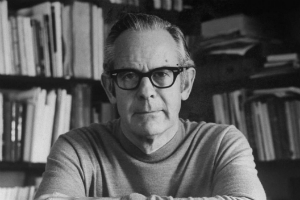 Rollo Reece May (April 21, 1909 – October 22, 1994) was an American existential psychologist. He was the author of the influential book Love and Will, which was published in 1969. He is often associated with both humanistic psychology and existentialist philosophy. He along with Viktor Frankl was a major proponent of "existential psychotherapy," which seeks to analyze the structure of human existence with the aim of understanding the reality underlying all situations of humans in crises. May was a close friend of the philosopher and theologian Paul Tillich, who also had a significant influence on his work. His works include "The Meaning of Anxiety", Love and Will, and The Courage to Create, the latter title honoring Tillich's The Courage to Be.

May was born in Ada, Ohio, on April 21, 1909. He experienced a difficult childhood when his parents divorced and his sister was diagnosed with schizophrenia. He was the first son of a family with six children. His mother often left the children to care for themselves, and with his sister being's schizophrenic, he bore a great deal of responsibility. His educational career took him to Michigan State University, where he pursued a major in English, but he was expelled due to his involvement in a radical student magazine. After being asked to leave, he attended Oberlin College and received a bachelor's degree in English. He later spent 3 years teaching in Greece at Anatolia College. During this time he studied with doctor and psychotherapist, Alfred Adler, with whom his later work also shares theoretical similarities. He became ordained as a minister shortly after coming back to the United States, but left the ministry after several years to pursue a degree in psychology. He was diagnosed with tuberculosis in 1942 and committed into a sanatorium for eighteen months. He later attended Union Theological Seminary for a BD during 1938, and finally to Teachers College, Columbia University for a PhD in clinical psychology in 1949. May was a founder and faculty member of Saybrook Graduate School and Research Center in San Francisco.

He spent the final years of his life in Tiburon on San Francisco Bay. A victim of declining health, May passed away due of congestive heart failure at the age of 85. He was attended in the end by his wife, Georgia, and friends.

The Meaning of Anxiety was Rollo May's first book. It was based on his doctoral dissertation, which in turn was based on his reading of the 19th century philosopher Søren Kierkegaard. "The Meaning of Anxiety" was written mainly to relate to people of western cultures, who are more likely to focus on anxiety as an issue in their life. May wrote this book with the intentions of it being easily read, yet still providing all the information that came from the research in studying the cause and effects of anxiety.

"Love and Will" is another of May's famous texts. This book investigates the shifting viewpoints of love and will in human behavior. It looks at the deep, internal dilemmas a human faces through their relationships.

May was influenced by American humanism, and interested in reconciling existential psychology with other philosophies, especially Freud's. May considered Otto Rank (1884–1939) to be the most important precursor of existential therapy. Shortly before his death, May wrote the foreword to Robert Kramer's edited collection of Rank's American lectures. "I have long considered Otto Rank to be the great unacknowledged genius in Freud's circle", wrote May. Abraham Maslow is a humanist psychologist. May is often grouped together with humanists, however, Maslow provided a good base for May's studies and theories as an existentialist. May delves further into the awareness of the serious dimensions of a human's life than Maslow did. Erich Fromm had many ideas that May agreed with relating to May's existential ideals. Fromm studied the ways people avoid anxiety by conforming to societal norms rather than doing what they please. Fromm also focused on self-expression and free will, all of which May based many of his studies on.

Like Freud, May defined certain "stages" of development. These stages are not as strict as Freud's psychosexual stages, rather they signify a sequence of major issues in each individual's life:

Innocence – the pre-egoic, pre-self-conscious stage of the infant. An innocent is only doing what he or she must do. However, an innocent does have a degree of will in the sense of a drive to fulfill needs.

Rebellion – the rebellious person wants freedom, but does not yet have a good understanding of the responsibility that goes with it.

Decision – The person is in a transition stage in their life such that they need to be more independent from their parents and settle into the "ordinary stage". In this stage they must decide what to do with their life, and fulfilling rebellious needs from the rebellious stage.

Ordinary – the normal adult ego learned responsibility, but finds it too demanding, and so seeks refuge in conformity and traditional values.

These are not "stages" in the traditional sense. A child may certainly be innocent, ordinary or creative at times; an adult may be rebellious. However, the only association with of the stages with certain ages is in terms of importance and salience. For example, rebelliousness is more important for the development of a teenager than for a two year old.

Anxiety is a major focus of Rollo May and is the subject of his work "The Meaning of Anxiety". He defines it as "the apprehension cued off by a threat to some value which the individual holds essential to his existence as a self." He also quotes Kierkegaard: "Anxiety is the dizziness of freedom". May's interest in isolation and anxiety developed strongly after his time in the sanatorium when he had tuberculosis. His own feelings of depersonalization and isolation as well as watching others deal with fear and anxiety gave him important insight into the subject. He concluded that anxiety is essential to an individual's growth and in fact contributes to what it means to be human. This is a way that humans enact on their freedom to live a life of dignity. He is adamant in the importance of anxiety and feelings of threat and powerlessness because it gives humans the freedom to act courageously as opposed to conforming to be comfortable). This struggle gives humans the opportunity to live life to the fullest (Friedman). One way in which Rollo proposes to fight anxiety is by displacing anxiety to fear as he believes that “anxiety seeks to become fear”. He claims that by shifting anxiety to a fear, one can therefore discover incentives to either avoid the feared object or find the means to remove this fear of it.

May's thoughts on love is documented mainly through his book "Love and Will", which focuses on love and sex in human behavior. He specifies 5 particular types of love, however, he believes that they should not be separate, but society has separated love and sex into two different ideologies.

Agape: Unselfish love, devotion to the welfare of others

Authentic love: Incorporates all other types of love

May particularly investigated and criticized the "Sexual Revolution" in the 1960s, in which many individuals were exploring their sexuality. "Free sex" was replacing the ideology of free love. May explains that love is intentionally willed by an individual, whereas sexual desire is the complete opposite. Love is real human instinct reflected upon deliberation and consideration.[clarification needed] May then shows that to give in to these impulses does not actually make one free, but to resist these impulses is the meaning of being free. May perceived the Hippie subculture and sexual mores of the 1960s and 1970s, as well as commercialization of sex and pornography, as having influenced society such that people believed that love and sex are no longer associated directly. According to May, emotion has become separated from reason, making it acceptable socially to seek sexual relationships and avoid the natural drive to relate to another person and create new life. May believed that sexual freedom can cause modern society to neglect more important psychological developments. May suggests that the only way to remedy the cynical ideas that characterize our times is to rediscover the importance of caring for another, which May describes as the opposite of apathy.

May believed that psychotherapists in the late 1900s had fractured away from the Jungian, Freudian and other influencing psychoanalytic thought and started creating their own 'gimmicks' causing a crisis within the world of psychotherapy. These gimmicks were said to put too much stock into the self where the real focus needed to be looking at 'man in the world'. To accomplish this, May pushed for the use of existential therapy over individually created techniques for psychotherapy.