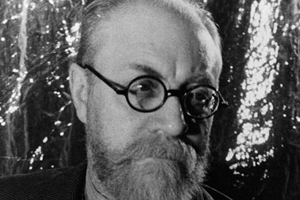 French painter, sculptor and lithographer, noted for being one of the foremost decorative French painters of his time and one of the most influential of the 1900s. While his superbly simple line drawings rank among the greatest works of graphic art he is best known for his abstract, intellectual use of color.

The son of a grain dealer and a homemaker who painted on china, Matisse led a traditional bourgeoisie childhood in Bohain, France while attending school at Saint-Quentin. In 1887 he enrolled at the University of Paris to study law and returned to Bohain two years later with a certificate to practice. While employed at a law firm in Saint-Quentin, he rose early to attend drawing classes before going to work at a school for tapestry and textile design. The following year, while he was recovering from appendicitis, his mother gave him a box of paints to help him pass the time. "When I started to paint I felt transported to a kind of paradise. In everyday life I was usually bored and vexed by the things that people were always telling me I must do. Starting to paint, I felt gloriously free, quiet and alone...I took fright, realizing that I could not turn back."

When completely recovered from appendicitis and fully hooked on painting, Matisse requested financial assistance from his mercantile father, who deeply distrusted bohemian pursuits, to study art in Paris. At first rejected in his request, his china painting mother discreetly intervened and the elder Monsieur Matisse was overruled. Matisse departed for Paris to study with Adolphe William Bougureau who told Matisse after reviewing his work "You'll never learn to draw." He abruptly left Bougureau to study with Gustave Moreau, who was so impressed with Matisse's talent he arranged for him to be accepted in his studio at Ecole Des Beaux Arts without subjecting him to entrance requirements.

While studying with Moreau, one of Matisse's models, Caroline Jabloud, became his lover and in 1894 gave birth to their illegitimate daughter Marguerite. When his relationship with Jabloud ended three years later, Matisse took legal custody of the child. In his desire to provide Marguerite with a suitable mother, he quickly married attractive 26-year-old Amelie Parayre on 1/08/1898, who agreed to adopted Marguerite. Two sons, Jean and Pierre, soon followed in rapid succession.

A series of setbacks occurred in 1898 for the struggling artist. Beginning with the death of his beloved mentor, Moreau, his successor was indifferent to Matisse's work and abruptly asked him to leave Ecole Des Beaux Arts. The monthly allowance from his father that served as his principal income could not be stretched to accommodate a family a five, so Amelie opened a small milliner's shop to help with family expenses. Matisse then became ill with bronchitis in 1901, forcing him and his family back to live in Bohain with his parents until his health was restored. Remaining in Bohain for two years, he returned to Paris and showed his work in several exhibitions, but none sold. His father cut him off financially at age 33 when it became apparent that his son painted pictures that had no commercial potential.

Success came in 1905 when Matisse and his circle of artists independently displayed their exuberantly colored paintings at the Salon d' Automne, the annual exhibition to which all of Paris came, to see what was being done by leading artists. A critic cynically labeled the collection of avant-garde canvases "les fauvres," ("wild beasts.") The notoriety served Matisse well. His "wild beast" paintings, including "Blue Nude" and "Les Danse," made him an international success, bringing him to the attention of collectors and finally securing the artist and his family with a stable income. One of his principal admirers was Leo Stein, brother of Gertrude Stein, who purchased Matisse's classic "Woman With The Hat." After Leo introduced him to his sister Gertrude, Matisse became an instant member of her salon, and her eclectic entourage greatly assisted in helping to launch Matisse's success by buying his works regularly. During this period he met experimental artist Pablo Picasso, who became simultaneously his lifelong friend and bitter rival.

When Matisse was rejected to serve in WW I in 1914 because of his age, he moved to a more natural setting in Nice on the Mediterranean coast. "I must interpret nature and submit it to the spirit of the picture. When I have found the relationship of all the tones, the result must be a living harmony of tones, a harmony not unlike that of a musical composition."

Estranged from Amelie and his sons, who remained in a Parisian suburb, Matisse lived in a series of hotels and saw his family only on their extended visits. During one of these visits, Amelie became ill and Matisse hired Russian assistant Lydia Delectorskaya to care for her. Upon Amelie's return to Paris, Lydia became Matisse's secretary, housekeeper, model, lover and lifelong companion even when Amelie returned for more extended visits. Understandably becoming more estranged from her husband over the years, she sought a legal separation in 1939. Matisse, now firmly established as an artist of international repute, traveled extensively and for some unknown reason never completed the separation documents.

Poor health plagued Matisse during the '40s. After undergoing an operation for duodenal cancer in 1941, he suffered two pulmonary embolisms followed by a severe case of flu. An attack of gallstones and jaundice followed in 1943, and the combined effects of these illnesses left him bedridden for long periods of time. Still driven to draw, he conceived his masterpiece, the decoration of the Dominican Chapel in Venice, near Nice, during convalescence. It was completed in 1949.

In the early '50s Matisse moved into a luxury hotel in Nice where he indulged himself with doves and parrots flying freely and one room became a terraced garden of exotic plants with its own sprinkler system. Now an invalid, he still dressed in a suit and tie every morning and created paper cut-outs that made him, in his '80s, again a leader of the avant-garde. He worked right up to the day of his death on 11/03/1954 in North Nice, France.