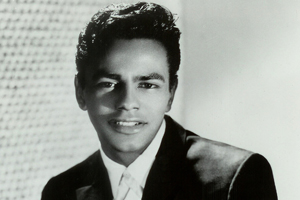 American singer who has been on the charts longer than any other performer except for Frank Sinatra. His career has included close to 80 albums in a span of 40 years. Some of his very first hits included "Wonderful, Wonderful" and "Chances Are."

Mathis was one of seven children born to Clem and Mildred Mathis, living in a basement apartment in San Francisco. In his teens, Mathis studied opera technique at 13 and learned to speak with good diction.

At San Francisco State University he set a high-jump record and played basketball against Bill Russell. Local papers called him "one of the best all-around athletes to come out of the Bay area." He turned down both an athletic scholarship and Olympic tryouts as a high jumper in 1956 so that he could go to New York to cut his first record.

His early hits were lyrical and romantic, making him America's only black millionaire by 1962. Painfully shy, it took him over 20 years to become comfortable performing on stage.

He says that as long as he performs "Misty" and "Chances Are" in a show, he can do whatever else he likes such as jazz-oriented music and R&B. His later hits include collaborations with Dionne Warwick in "Friends in Love" and "Too Much, Too Little, Too Late" with Deniece Williams. He has had more than 60 gold and platinum records.

Mathis lives in a West Hollywood home once owned by Howard Hughes and a small ranch above Santa Barbara in the Santa Ynez Valley. A passionate gardener and chef, he enjoys weekend golf and cooking for guests.