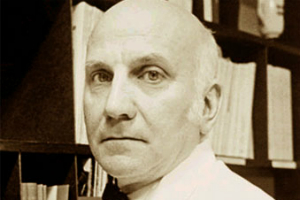 American physician and researcher in the field of human sexuality, a pioneer who changed the way that American looked at sex. Completing his medical training in 1943, Masters joined the faculty of Washington University Hospital OB/GYN department.

From the time he began his original work on sex research 7/01/1954, he pursued his course with single-minded focus for the next 17 years, not taking so much as a day off. Building on the work of '40s researcher Alfred Kinsey, his first papers began to appear in 1959 though it was not until 4/18/1966 that his "Human Sexual Response" was published. Masters was made a full Professor in 1969.

First married on 6/13/1942, Masters had two kids. His research assistant Virginia Johnson began working with him on 1/02/1957. In 1964 they established the Reproductive Biology Research Foundation where the study of the psychology and physiology of sexual intercourse was carried out using volunteer subjects under laboratory conditions.

After their first bestseller in 1966 they brought out "Human Sexual Inadequacy" in 1970. Masters' marriage concluded that year and he married Johnson on 1/07/1971. They co-founded the Masters and Johnson Institute in St. Louis, MO in 1973. After 20 years of good work together, Masters and Johnson divorced in 1992.

In 1993, Masters made a third marriage, to a college sweetheart, Geraldine Oliver. He continued with the Institute until 1994, when he retired and moved into the alternate universe of Alzheimer's. Masters died on 2/16/2001, Tucson.