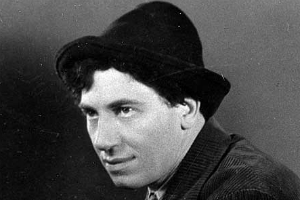 Leonard "Chico" Marx (March 22, 1887 – October 11, 1961) was an American comedian and film star as part of the Marx Brothers. His persona in the act was that of a charming, dim-witted albeit crafty con artist, seemingly of rural Italian origin, who wore shabby clothes, and sported a curly-haired wig and Tyrolean hat. In virtually every film that includes the main trio of the Marx Brothers, Chico is seen working with Harpo Marx, usually as partners-in-crime.

Leonard was the oldest of the Marx Brothers, though he was not the first-born; he was preceded by Manfred Marx, who died in infancy. In addition to his work as a performer, he played an important role in the management and development of the act, at least in its early years.

Marx used an Italian persona for his on-stage character; stereotyped ethnic characters were common with vaudevillians. The obvious fact that he was not really Italian was referenced three times on film. In their second feature, Animal Crackers, he recognizes someone he knows to be a shady character impersonating a respected art collector:

Ravelli (Chico): "How is it you got to be Roscoe W. Chandler?"

Chandler: "Say, how did you get to be Italian?"

Ravelli: "Never mind—whose confession is this?"

In Duck Soup, when Chico impersonates Groucho but retains his accent, Margaret Dumont asks what happened to his voice. Chico replies, "Well, maybe sometime I go to Italy and I'm practicing the language." To which Dumont replies, "Your dialect is perfect." However, this statement could have been a ruse on Chico's part to explain his accent and trick Dumont, as he was portraying Groucho rather than himself.

In A Night at the Opera, which begins in Italy, his character, Fiorello, claims not to be Italian, eliciting a surprised look from Groucho:

Driftwood (Groucho): "Well, things certainly seem to be getting better around the country."

Fiorello (Chico): "Well, I wouldn't know about that; I'm a stranger here myself."

A scene in the film Go West, in which Chico attempts to placate an Indian chief of whom Groucho has run afoul, has a line that plays a bit on Chico's lack of Italian nationality, but is more or less proper Marxian wordplay:

Joe Panello (Chico): "I was born in Indianapolis!"

However, there are moments where Chico's characters appear to be genuinely Italian; examples include the film The Big Store, in which his character Ravelli runs into an old friend he worked with in Naples (after a brief misunderstanding due to his accent), the film Monkey Business, in which Chico claims his grandfather sailed with Christopher Columbus, and their very first outing The Cocoanuts, where Mr. Hammer (Groucho) asks him if he knew what an auction was, in which he responds "I come from Italy on the Atlantic Auction!"

Chico was a talented pianist. He originally started playing with only his right hand and fake playing with his left, as his teacher did so herself. Chico eventually acquired a better teacher and learned to play the piano correctly. As a young boy, he gained jobs playing piano to earn money for the Marx family. Sometimes Chico even worked playing in two places at the same time. He would acquire the first job with his piano-playing skills, work for a few nights, and then substitute Harpo on one of the jobs. (During their boyhood, Chico and Harpo looked so much alike that they were often mistaken for each other.)

In a record album about the Marx Brothers, narrator Gary Owens stated that "although Chico's technique was limited, his repertoire was not." The opposite was true of Harpo, who reportedly could only play two tunes on the piano, which typically thwarted Chico's scam and resulted in both brothers' being fired.

Groucho Marx once said that Chico never practiced the pieces he played. Instead, before performances he soaked his fingers in hot water. He was known for 'shooting' the keys of the piano. He played passages with his thumb up and index finger straight, like a gun, as part of the act. Other examples of his keyboard flamboyance are found in A Night at the Opera (1935), wherein he plays the piano for a group of delighted children, and A Night in Casablanca (1946), where he plays a rendition of "The Beer Barrel Polka".

Chico became manager of the Marx Brothers after their mother, Minnie, died. As manager, he cut a deal to get the Marx Brothers a percentage of a film's gross receipts— the first of its kind in Hollywood. Furthermore, it was Chico's connection with Irving Thalberg of MGM that led to Thalberg's signing the Brothers when they were in a career slump after Duck Soup (1933), the last of their films for Paramount Pictures.

For a while in the 1930s and 1940s, Chico led a big band. Singer Mel Tormé began his professional career singing with the Chico Marx Orchestra.

Pronunciation and origin of name

He was originally nicknamed Chicko. A typesetter accidentally dropped the "k" in his name and it became Chico. It was still pronounced "Chick-oh" although those who were unaware of its origin tended to pronounce it "Cheek-oh". Radio recordings from the 1940s exist where announcers and fellow actors mispronounce the nickname, but Chico apparently felt it was unnecessary to correct them. As late as the 1950s, even Groucho used the wrong pronunciation for comedic effect. A guest on You Bet Your Life told the quizmaster she grew up around Chico (California) and Groucho responded, "I grew up around Chico myself. You aren't Gummo, are you?"

During Groucho Marx's live performance at Carnegie Hall (circa 1972), Groucho states that his brother got the name Chico because he was a "Chicken-chaser" (early slang for chasing women). "In England now, they call them birds."

Marx was a compulsive womanizer and had a lifelong gambling habit. His favorite gambling pursuits were card games as well as horse racing, dog racing, and various sports betting. His addiction cost him millions of dollars by his own account. When an interviewer in the late 1930s asked him how much money he had lost from gambling, he answered, "Find out how much money Harpo's got. That's how much I've lost." Gummo Marx, in an interview years after Chico's death, said: "Chico's favorite people were actors who gambled, producers who gambled, and women who screwed." Chico's lifelong gambling addiction compelled him to continue in show business long after his brothers had retired in comfort from their Hollywood income, and in the early 1940s he found himself playing in the same small, cheap halls in which he had begun his career 30 years earlier. The Marx Brothers' second-to-last film, A Night in Casablanca (1946), was made for Chico's benefit since he had filed for bankruptcy a few years prior. Because of his out-of-control gambling, the brothers finally took the money as he earned it and put him on an allowance, on which he stayed until his death.

Marx had a reputation as a world-class pinochle player. His brother Groucho said Chico would throw away good cards (with the knowledge of spectators) to make the play "more interesting." Chico's last public appearance was in 1960, playing cards on the television show Celebrity Bridge. He and his partner lost the game.

Marx was born in New York City, New York. His parents were Sam Marx (called "Frenchie" throughout his life), and his wife, Minnie Schoenberg Marx. Minnie's brother was Al Schoenberg, who changed his name to Al Shean when he went into show business. He was half of Gallagher and Shean, a noted vaudeville act of the early 20th century. Marx's family was Franco-German Jewish. His mother was from Dornum in East Frisia; and his father was a native of Alsace, and worked as a tailor.

Marx was married twice. His first marriage was to Betty Karp in 1917. Their union produced one daughter named Maxine (1918–2009). Marx's first marriage was plagued by his infidelity, but lasted much longer than any of Groucho's; he was very close to his daughter Maxine and gave her acting lessons

Marx's second marriage was to Mary De Vithas. They married in 1958, three years before his death.

Marx died of arteriosclerosis on October 11, 1961 at his Hollywood home: he was the eldest brother and the first to pass away. During his lifetime, his year of birth had commonly been given as 1891 instead of the true year of 1887; as a result, obituaries reported his age at the time of his passing as 70 rather than 74.

Marx is entombed in a crypt in the Freedom Mausoleum in Forest Lawn Memorial Park Cemetery in Glendale, California. Marx's younger brother Gummo is in a crypt across the hall from him.