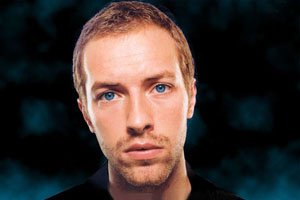 He has a baritenor voice, is known for his frequent use of falsetto and is the husband of actress Gwyneth Paltrow.

Martin was born as the eldest of five children of Anthony and Alison Martin, an accountant and teacher, respectively, in Exeter, Devon, England. Martin was educated at Sherborne School, a famous boys' independent school in Sherborne, Dorset, in England, and later at University College London where he read Ancient World Studies, gaining 1st Class Honours. Martin was also partial to playing the family piano from a young age, and would later learn how to play the guitar.

As a solo artist, Martin has written songs for a variety of acts including Embrace ("Gravity") and Jamelia ("See It In a Boy's Eyes"). Martin has also collaborated with Ron Sexsmith, Faultline, The Streets, and Ian McCulloch.

He also sang a part of the vocals for the Band Aid 20 single, "Do They Know It's Christmas?" at the end of 2004. In 2005, Martin collaborated with Nelly Furtado on the track "All Good Things (Come to an End)", for her 2006 album, Loose. The two were once rumoured to be a couple, after they both performed at Glastonbury in 2002. Furtado joked about the situation, saying that "Yeah, he's my boyfriend — he just doesn't know it yet". Martin is also expected to work on a solo collaboration with Kanye West, with whom he shared an impromptu jam session during a 2006 concert at Abbey Road Studios.

His collaboration with Kanye West will most likely be the first single from Kanye West's new album, Graduation, slated for released in late 2007, as well as appearing on a track titled "Part Of The Plan" for Swizz Beatz' One Man Band Man due out August 21st. Martin's fascination with Hip Hop was further extended in the Summer of 2006 when he collaborated with rapper Jay-Z for the rapper's comeback album "Kingdom Come". The two artists met earlier in the year, and subsequently kept in touch, when Jay-Z told Martin he'd like to work together. Martin put some chords together for a song known as "Beach Chair" and sent them to Jay-Z who enlisted the help of Hip Hop producer Dr. Dre to add the drum line to complete the track. The song was performed on September 27th, 2006 by the two during Jay-Z's European tour at Royal Albert Hall. "Beach Chair" is featured on the album Kingdom Come and is rumored to be the third single off the album.

Surprisingly to some, the band that Martin credits with the heaviest influence on him as a musician is Norwegian pop-band A-ha. Like other Coldplay-members he has praised the band on several occasions: "Everyone asks us who has inspired Coldplay, who we have stolen from, who we listened to when we grew up.

Such questions remind you of what has formed you and had an impact on you. The first bands I loved were A-ha and James." One song in particular has stayed in Martin's mind, as the following quote says: "As a 12 year old, Hunting High and Low was always in my head, and A-ha still continues to be an important band to me." In 2005 Martin said "I was in Amsterdam the other day and I put on the album Hunting High and Low. I remembered right there and then how much I loved that album.

It's just unbelievable songwriting." He has also been known to copy the style of A-ha vocalist Morten Harket: "It was the way Morten Harket used to have different things on his wrists. I do it myself, still. He is the most disarming and beautiful man you'll ever gonna meet."

On a German radio some years ago Martin's affection for A-ha again came to show as he did an acoustic version of Hunting High and Low with the following introduction: "When you don't have more of your own songs, you have to go to things you listened to as a child. One of the bands that I and the others in Coldplay listened to a lot when we were young, was A-ha from Norway. We're not so into being hip any longer and that's why we're not afraid to say that we liked them. This is a tribute to A-ha". Martin has also cited The Police and Sting as influences.

Martin and Coldplay guitarist Jon Buckland made cameo appearances in the film Shaun of the Dead as supporters of the fictional charity ZombAid. In 2006 Martin had a cameo role in the second series episode four of the Ricky Gervais- and Stephen Merchant-created comedy Extras.

Martin has been particularly outspoken on issues of fair trade. He has done a great deal of campaigning for the charity Oxfam's Make Trade Fair campaign. He personally traveled to Ghana and Haiti to study the effects of unfair trade practices. When performing, he usually has variations of "Make Trade Fair", "MTF" or an equal sign written on his left hand. The letters "MTF" can be seen emblazoned on his piano during live performances.

Martin has been somewhat active in politics. He was a vocal critic of President George W. Bush and the war in Iraq. Martin was a strong supporter of Democratic presidential nominee John Kerry, most notably during his acceptance speech for the 2004 Grammy Awards Record of the Year, accepting for "Clocks".

On April 1, 2006, The Guardian reported the unlikely news that Martin was backing the British Conservative Party leader David Cameron and had written a new theme song for the party entitled "Talk to David". This was later revealed to be an April Fool's joke.

Martin married actress Gwyneth Paltrow on December 5, 2003. Their daughter, Apple Blythe Alison Martin, was born on May 14, 2004 in London. The couple's second child, Moses Bruce Anthony Martin, was born in New York City on April 8, 2006. Interestingly Simon Pegg is one of Apple Martin's godfathers (the other is bandmate Jonny Buckland), resultant of a friendship between Gwyneth and Simon, prior to Chris' appearance in Shaun of the Dead.

Selected events
Martin was voted as one of PETA's two 2005 "World's Sexiest Vegetarians".

Trivia
William Willett, the inventor of daylight saving time, is Martin's great-great-grandfather.
Lost his virginity at age 22.
Martin is ambidextrous, he writes with his left hand, plays the french guitar the orthodox way and draws with his right hand.
He often refers to himself as "Crono" emulating his hero Bono.
He is a close friend of comedian Simon Pegg and singer-songwriter Matthew Logan.
He was named one of the "25 Biggest Wusses... Ever" in the July 2006 issue of Blender.