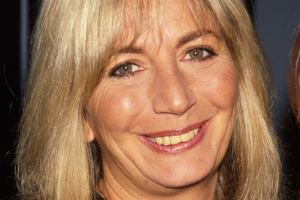 Carole Penny Marshall (born October 15, 1943) is an American actress, television producer, film producer, and television director. After playing several small roles for television, she was cast as Laverne DeFazio on the sitcom Laverne & Shirley, which ran from 1976 until 1983, during which Marshall was nominated for a Golden Globe award for her performance three times.

She progressed to directing films such as Big (1988), the first film directed by a woman to gross in excess of $100 million at the U.S. box office, Awakenings (1990), which was nominated for an Academy Award for Best Picture, and A League of Their Own (1992). She produced Cinderella Man (2005) and Bewitched (2005), as well as episodes of According to Jim (2009). She recently directed two episodes of the Showtime series United States of Tara.

Carole Penny Marshall was born in St. Vincent's Hospital, New York City, in 1943, to Marjorie Irene (née Ward), a tap dance teacher who ran the Marjorie Marshall Dance School, and Anthony "Tony" Masciarelli, later Marshall, a director of industrial films and later a producer. She is the sister of actor/director/TV producer Garry Marshall and Ronny Hallin, a television producer. Her birth name Carole was selected because her mother's favorite actress was Carole Lombard.

Her father was of Italian descent, his family having come from Abruzzo, and her mother was of English and Scottish descent; her father changed his last name from Masciarelli to Marshall before Penny was born. Religion played no role in the Marshall children's lives. Garry Marshall was christened Episcopalian, Ronny was Lutheran, and Penny was confirmed in a Congregational church, because "... Mother sent us anyplace that had a hall where she could put on a recital. If she hadn't needed performance space, we wouldn't have bothered."

She grew up at 3235 Grand Concourse, the Bronx, a street that also spawned Neil Simon, Paddy Chayefsky, Calvin Klein, and Ralph Lauren. She began her career as a tap dancer at age three, and later taught tap at her mother's dance school. She graduated from Walton High School and attended the University of New Mexico. In 1967, she moved to Los Angeles to join her older brother Garry Marshall, a writer whose credits at the time included TV's The Dick Van Dyke Show (1961–1966).

Marshall first gained prominence as a television actress with a recurring guest role of Myrna Turner on The Odd Couple (1971–1975). In Marshall's ultimate appearance as Myrna Turner, Myrna married her boyfriend, Sheldn ("They forgot the 'o' on his birth certificate; legally, it's 'Sheldn'"), played by her then-real-life husband, Rob Reiner, and briefly introduced her brother and sister, Werner Turner and Verna Turner (played by, respectively, Marshall's real-life siblings, Garry and Ronny). Before appearing on The Odd Couple, Marshall was considered to play the role of Gloria Bunker Stivic on All In The Family. She ultimately lost the part to Sally Struthers while her husband, Rob Reiner, was cast as Gloria's husband, Michael "Meathead" Stivic.

In 1974, James L. Brooks and Allan Burns, executive producers of the hit situation comedy, The Mary Tyler Moore Show, cast Marshall as Janice Dreyfuss, sister-in-law to Paul Dreyfuss (played by actor Paul Sand) in the series, Paul Sand in Friends and Lovers. It aired on CBS-TV Saturday nights beginning September 14, 1974, as part of the powerhouse lineup of All In The Family, The Mary Tyler Moore Show, The Bob Newhart Show, and The Carol Burnett Show. Despite good reviews and decent ratings, it was canceled mid-season. Brooks and Burns, along with studio head Grant Tinker were so impressed with Marshall's comedic talent that the following season, they hired Marshall and actress Mary Kay Place to play Mary Richards' new neighbors (Paula and Sally Jo, respectively) on The Mary Tyler Moore Show, after Mary moved into her new apartment in a high-rise. Then Garry Marshall, creator/part-time writer for Happy Days, cast his sister, Penny, and Cindy Williams to guest on an episode of that show. The installment, titled "A Date with Fonzie", aired on November 11, 1975 and introduced the characters LaVerne DeFazio and Shirley Feeney (played by Marshall and Williams, respectively). In that episode, Laverne and Shirley were a pair of wise-cracking brewery workers, who were dates for Fonzie (played by Winkler) and Richie (played by Howard). The pair were such a hit with the studio audience that Garry Marshall decided to co-create and star them in a hit spin-off, Laverne and Shirley (1976–1983). The characters of Laverne and Shirley also appeared in five more episodes of Happy Days.

In 1983, while still filming Laverne and Shirley, Marshall guest-starred on Taxi in a cameo appearance as herself. In the Taxi episode "Louie Moves Uptown", Marshall is turned down for residency in a new high-rise condo in Manhattan. The Laverne and Shirley episode "Lost in Spacesuits" is referenced in the scene. At the encouragement of her brother, Marshall became interested in directing. She directed two episodes of Laverne and Shirley and other TV assignments. She soon moved on to theatrical films, her first film being Jumpin' Jack Flash (1986) starring Whoopi Goldberg.

Marshall has directed several successful feature films since the mid-1980s, including 1988's Big starring Tom Hanks (the first film directed by a woman to gross over US$100 million), Awakenings (1990) starring Robin Williams and Robert De Niro, A League of Their Own (1992) with Geena Davis, Tom Hanks, Madonna and Rosie O'Donnell, and The Preacher's Wife (1996) starring Denzel Washington and Whitney Houston. In 1991, she was awarded the Women in Film Crystal Award. She lent her voice to Ms. Botz aka Ms. Botzukowski, the "babysitter bandit", on the first produced episode of The Simpsons, and played a cameo role as herself on the HBO series Entourage. She also made a cameo appearance alongside her brother Gary Marshall in the movie Hocus Pocus.

She will reunite with her Laverne & Shirley co-star Cindy Williams in reprising her 'Laverne DeFazio' role on a 2013 episode of Sam & Cat.

While attending the University of New Mexico in Albuquerque, Marshall met Michael Henry, a football player. She left college to marry him in 1961; they had a daughter, Tracy. Marshall worked as a secretary and later as a tap dance teacher. The marriage lasted two years. On April 10, 1971, Marshall married actor/director Rob Reiner, and her daughter took the name Tracy Reiner. Her marriage to Reiner lasted until 1981.