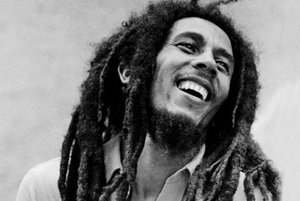 He is the most widely known performer of reggae music, and is famous for popularising the genre outside Jamaica. A faithful Rastafari, Marley is regarded by many as a prophet of the religion.

Marley is best known for his reggae songs, which include the hits "I Shot the Sheriff", "No Woman, No Cry", "Three Little Birds", "Exodus", "Could You Be Loved", "Jammin", "Redemption Song", and "One Love". His posthumous compilation album Legend (1984) is the best-selling reggae album ever, with sales of more than 12 million copies.

Marley was born in the small village of Nine Mile in the Saint Ann Parish, Jamaica. His father, Norval Sinclair Marley, was a white Jamaican born in 1895 to British parents from Sussex. Norval was a Marine officer and captain, as well as a plantation overseer, when he married Cedella Booker, then an eighteen-year-old black Jamaican. Norval provided financial support for his wife and child, but seldom saw them, as he was often away on trips. Marley was ten years old when his father died of a heart attack in 1955 at age 60.

Marley suffered racial prejudice as a youth, because of his mixed racial origins, and faced questions about his own racial identity throughout his life. He once reflected:

Marley and his mother moved to Kingston's Trenchtown slum after Norval's death. He was forced to learn self-defense, as he became the target of bullying because of his racial makeup and small stature (5'4" or 163 cm tall). He gained a reputation for his physical strength, which earned him the nickname "Tuff Gong".

Marley became friends with Neville "Bunny" Livingston (later known as Bunny Wailer), with whom he started to play music. He left school at the age of 14 and started as an apprentice at a local welder's shop. In his free time, he and Livingston made music with Joe Higgs, a local singer and devout Rastafari who is regarded by many as Marley's mentor. It was at a jam session with Higgs and Livingston that Marley met Peter McIntosh (later known as Peter Tosh), who had similar musical ambitions.

In 1962, Marley recorded his first two singles, "Judge Not" and "One Cup of Coffee", with local music producer Leslie Kong. These songs, released on the Beverley's label under the pseudonym of Bobby Martell, attracted little attention. The songs were later re-released on the album Songs of Freedom, a posthumous collection of Marley's songs.

The Wailers in the mid-1960s. From left to right: Bunny Wailer, Bob Marley, Peter Tosh.In 1963, Bob Marley, Bunny Livingston, Peter McIntosh, Junior Braithwaite, Beverley Kelso, and Cherry Smith formed a ska and rocksteady group, calling themselves "The Teenagers". They later changed their name to "The Wailing Rudeboys", then to "The Wailing Wailers", and finally to "The Wailers". By 1966, Braithwaite, Kelso, and Smith had left The Wailers, leaving the core trio of Marley, Livingston, and McIntosh.

Marley took on the role of leader, singer, and main songwriter. Much of The Wailers' early work, including their first single Simmer Down, was produced by Coxsone Dodd at Studio One. Simmer Down topped Jamaican Charts in 1964 and established The Wailers as one of the hottest groups in the country. They followed up with songs such as "Soul Rebel" and "400 Years".

In 1966, Marley married Rita Anderson, and moved near his mother's residence in Wilmington, Delaware for a few months. Upon returning to Jamaica, Marley became a member of the Rastafari movement, and started to wear his trademark dreadlocks (see the religion section for more on Marley's religious views).

After a conflict with Dodd, Marley and his band teamed up with Lee "Scratch" Perry and his studio band, The Upsetters. Although the alliance lasted less than a year, they recorded what many consider The Wailers' finest work. Marley and Perry split after a dispute regarding the assignment of recording rights, but they would remain friends and work together again.

Between 1968 and 1972, Bob and Rita Marley, Peter McIntosh and Bunny Livingston re-cut some old tracks with JAD Records in Kingston and London in an attempt to commercialize The Wailers' sound. Livingston later asserted that these songs "should never be released on an album … they were just demos for record companies to listen to."

The Wailers' first album, Catch A Fire, was released worldwide in 1973, and sold well. It was followed a year later by Burnin', which included the songs "Get Up, Stand Up" and "I Shot The Sheriff". Eric Clapton made a hit cover of "I Shot the Sheriff" in 1974, raising Marley's international profile.

The Wailers broke up in 1974 with each of the three main members going on to pursue solo careers. The reason for the breakup is shrouded in conjecture; some believe that there were disagreements amongst Livingston, McIntosh, and Marley concerning performances, while others claim that Livingston and McIntosh simply preferred solo work. McIntosh began recording under the name Peter Tosh, and Livingston continued as Bunny Wailer.

In 1975, Marley had his international breakthrough with his first hit outside Jamaica, "No Woman, No Cry" from the Natty Dread album. This was followed by his breakthrough album in the US, Rastaman Vibration (1976), which spent four weeks on the Billboard charts Top Ten.

In December 1976, two days before "Smile Jamaica", a free concert organized by Jamaican Prime Minister Michael Manley in an attempt to ease tension between two warring political groups, Marley, his wife, and manager Don Taylor were wounded in an assault by unknown gunmen inside Marley's home. Taylor and Marley's wife sustained serious injuries, but later made full recoveries. Bob Marley received only minor injuries in the chest and arm. The shooting was thought to have been politically motivated, as many felt the concert was really a support rally for Manley. Nonetheless, the concert proceeded, and an injured Marley performed as scheduled.

Marley left Jamaica at the end of 1976 for England, where he recorded his Exodus and Kaya albums. Exodus stayed on the British album charts for 56 consecutive weeks. It included four UK hit singles: "Exodus", "Waiting In Vain", "Jamming", "One Love", and a rendition of Curtis Mayfield's hit, "People Get Ready". It was here that he was arrested and received a conviction for possession of a small quantity of cannabis while traveling in London.

Survival, a defiant and politically charged album, was released in 1979. Tracks such as "Zimbabwe", "Africa Unite", "Wake Up and Live", and "Survival" reflected Marley's support for the struggles of Africans. In early 1980, he was invited to perform at the April 17 celebration of Zimbabwe's Independence Day.

Uprising (1980) was Bob Marley's final studio album, and is one of his most religious productions, including "Redemption Song" and "Forever Loving Jah". It was in "Redemption Song" that Marley sang the famous lyric,

Confrontation, released posthumously in 1983, contained unreleased material recorded during Marley's lifetime, including the hit "Buffalo Soldier" and new mixes of singles previously only available in Jamaica.

Cancer diagnosis
In July 1977, Marley was found to have malignant melanoma in a football wound on his right hallux (big toe). Marley refused amputation, citing worries that the operation would affect his dancing, as well as the Rastafari belief that the body must be "whole":

“ Rasta no abide amputation. I don't allow a man to be dismantled. ”
—From the biography Catch a Fire

Marley may have seen medical doctors as samfai. True to this belief Marley went against all surgical possibilities and sought out other means that would not break his religious beliefs. He also refused to register a will, based on the Rastafari belief that writing a will is acknowledging death as inevitable, thus disregarding the everlasting character of life.

Collapse and treatment
The cancer then spread to Marley's brain, lungs, liver, and stomach. After playing two shows at Madison Square Garden as part of his fall 1980 Uprising Tour, he collapsed while jogging in NYC's Central Park. The remainder of the tour was subsequently cancelled.

Bob Marley played his final concert at the Stanley Theater in Pittsburgh, Pennsylvania on September 23, 1980. The live version of "Redemption Song" on Songs of Freedom was recorded at this show. Marley afterwards sought medical help from Munich specialist Josef Issels, but his cancer had already progressed to the terminal stage.