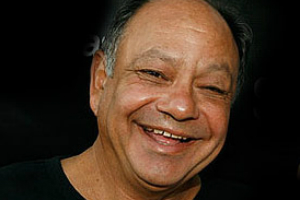 Mexican-American actor and comedian. A member of the "Cheech and Chong" comedy team whose hilarious counter-culture comic routines won them a Grammy Award and gold records. Their six films together include "Up in Smoke," "Nice Dreams," and "The Corsican Brothers."

Cheech (short for his nickname "Chicharron") was one of four children of policeman Oscar Marin and his wife Ella, a secretary. Growing up in Granada Hills and other rough Los Angeles neighborhoods, he cultivated a gallows humor at a young age. "By the time I was seven, I had witnessed three murders," he said, "What I always remembered about my Dad and the whole police experience was how gruesome it was ... You had to laugh in the face of disaster." Officer Marin was not amused about his only son's drug use or his views on the Vietnam War, which Cheech avoided by moving to Canada.

In 1969, Cheech joined the comedy troupe "City Works" while living in Vancouver, where he met nightclub owner Tommy Chong. Moving back to Los Angeles in 1970, the two refined their unique act which brought them international success.

After breaking up the act with Chong in 1984 over creative differences, Cheech pursued an acting career. He now makes a younger generation laugh with his voice of Banzai the Hyena in "The Lion King," along with his role as the burrito man in the 1998 film "Paulie." His TV series," Nash Bridges" with Don Johnson turned out to be a big hit. "I want to have an audience that goes from womb to tomb...I personify all the changes our generation went through, in the extreme."

Marin's first marriage to Darlene Morely ended in divorce in 1984. Their daughter Carmen was born in 1980. He made a second marriage to artist Patti Heid and had son Joey in 1986 and daughter Jasmine in 1993. "You want to raise your kids with open minds, but not so open their brains fall out." He makes his home in San Francisco where he owns one of the largest collections of Chicano folk art in private hands.