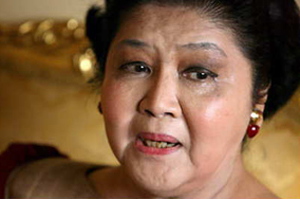 Imelda Trinidad Romualdez-Marcos (born July 2, 1929 in Manila) is the widow of Ferdinand Marcos, former First Lady, and an influential political figure in the Philippines. She is known as the "Steel Butterfly" and remains a controversial figure not only in her home country, but around the world. Her extensive shoe collection is world-renowned.

Imelda Remedios Visitacion Trinidad Romualdez Marcos was born on July 2, 1929 in San Juan de Dios Hospital in Manila. Her parents were Vicente Orestes Romualdez (of Spanish blood) and Remedios Trinidad, the second wife of the widowed-Vicente. Her paternal ancestors founded the town of Tolosa, Leyte .Her own branch of the family was not political. Her father was a scholarly man more interested in music and culture than in public life. Her mother, a dressmaker who grew up in an orphanage in Manila, is a Trinidad from the town of Baliuag, Bulacan, famed for the charm of its women.

Imelda spent her childhood in the shadow of the Malacañang Palace in San Miguel District in Manila, since her family then lived near San Miguel Church. After his second wife Remedios died, and their home foreclosed, Vicente moved his family back to Leyte to live with relatives, where Imelda earned a bachelor's degree in education at St. Paul's College."

She also became a beauty queen. At the age of 18, she was crowned the "Rose of Tacloban," became "Miss Leyte", went to Manila in 1953, and was named the "Muse of Manila" by then Manila Mayor, Arsenio Lacson, after she protested her loss in the Miss Manila pageant.

In 1954, Imelda met then-Ilocos Norte Congressman Ferdinand E. Marcos. After a whirlwind courtship in Baguio during Holy Week, they were married in May of that year at the Manila Pro-Cathedral Church with President Ramon Magsaysay as principal sponsor. They have three children, Maria Imelda "Imee" Marcos, Ferdinand "Bongbong" Marcos, Jr., and Irene Marcos; and one adopted daughter, Aimee.

In 1966, Ferdinand Marcos became the 10th President of the Philippines. Together with Imelda, he would rule the Philippines as a Dictator from September 21, 1972 up to until he was ousted on February 1986 in the famous People Power Revolution when he fled the Philippines.

Imelda: The First Lady
In 1966, Ferdinand Edralin Marcos became President of the Philippines.

In July 1966, Imelda Marcos was "snubbed" by The Beatles, who were in the country on tour, when they did not accept an invitation to join the First Lady for breakfast. The famous no-show was televised nationally.

In 1969, Ferdinand became the first President of the Philippine Republic to be re-elected a second and last 4-year term. In September 23, 1972, President Marcos declared martial law. It was during the martial-law period that Imelda Marcos assumed a public role in the government. She was appointed to various positions in the government, to name a few: Governor of Metropolitan Manila; Minister of Human Settlement;and Ambassador Plenipotentiary and Extraordinary. On December 7, 1972, an assailant tried to stab her to death with a knife during an award ceremony broadcast live on television. The assailant was shot to death by security police; the wounds on Imelda Marcos' hands and arms required 75 stitches. In 1978, she was elected as member of the 165-member Interim Batasang Pambansa (National Assembly) representing the National Capital Region.

As a Special Envoy, Mrs. Imelda Marcos was instrumental in the opening of Philippine diplomatic relations with China, the Soviet Union, and the Soviet satellite states in Eastern Europe (Romania, Hungary, Czechoslovakia, East Germany, etc.), Middle East, Libya, and Cuba, in the securing of a cheap supply of oil from China and Libya; and in the signing of the Tripoli Agreement.

Imelda Marcos' extravagant lifestyle reportedly included five-million-dollar shopping tours in New York, Rome and Copenhagen in 1983, and sending a plane to pick up Australian white sand for a new beach resort. She purchased a number of properties in Manhattan in the 1980s, including the $51-million Crown Building and the $60-million Herald Centre; she declined to purchase the Empire State Building for $750m as she considered it "too ostentatious". Her New York real estate was later seized and sold, along with much of her jewels and most of her 175 piece art collection, which included works by Michelangelo, Botticelli, and Canaletto. She responded to criticisms of her extravagance by claiming that it was her "duty" to be "some kind of light, a star to give guidelines."

She was instrumental in securing the 1974 Miss Universe Pageant for Manila, and organized the Kasaysayan ng Lahi, a festival showcasing the history of the Philippines. She also claimed to have launched a massive family-planning program to reduce population growth, despite opposition from the country's powerful Catholic Church

On February 25, 1986, Ferdinand Marcos and his family fled to Hawaii (via Guam) after his regime was toppled by a four-day People Power Revolution in EDSA. Marcos was succeeded by Corazon Aquino, widow of the slain former Senator Benigno Aquino, Jr. Upon assuming office, President Aquino issued Executive Order No. 1, creating the Presidential Commission on Good Government to investigate and sequester the alleged unexplained wealth of the Marcoses. President Aquino abolished the Batasang Pambansa (Philippine Parliament) and the Ministry of Human Settlements, Imelda's former ministry.

After the Marcos family fled Malacañang Palace, Imelda was found to own 15 mink coats, 508 gowns, 888 handbags and 1060 pairs of shoes. In February 2006, Imelda insisted that Ferdinand Marcos acquired his wealth legitimately as a gold trader. By the late 1950s, she claimed, he had amassed a personal fortune of 7,500 tons of gold, and after gold prices climbed in the 1970s, the Marcos family was worth 35 billion dollars. However, the Bureau of Internal Revenue has no record of the Marcos family declaring or paying taxes on these assets, and the origins of their wealth remains open to investigation.

Ousted President Marcos died in exile on September 29, 1989. President Aquino refused to permit the repatriation of his remains for national security reasons. The Supreme Court upheld the decision of the government in Marcos vs. Manglapus. However, in 1991, Imelda Marcos was finally allowed to return home.

Marcos was the first wife of a foreign head of state to stand trial in an American court. In 1990 she was acquitted of racketeering and fraud charges, alongside co-defendant Adnan Khashoggi, a Saudi Arabian former billionare and arms dealer. The "theatrical" trial involved many celebrities: Marcos and Khashoggi were represented by infamous trial lawyer Gerry Spence; Marcos' $5 million dollar bail was posted by tobacco heiress Doris Duke; and actor George Hamilton was a star witness for the defense.

In 1992, Mrs. Marcos ran and finished fifth in the seven-way presidential race. Her votes were split between her, with 2,338,294 votes, and Ambassador Eduardo Cojuangco, Jr., a Marcos crony, with 4,116,376 votes. Fidel Ramos, Aquino’s anointed candidate, received 5.3 million and won the election.In 1995, she was elected Congresswoman of Leyte, representing the first district of her home province.

In 1998, she made another bid for the presidency but later backed out of the race to support the candidacy of then Vice President Joseph Ejercito Estrada. Imelda Marcos finished 9th among 11 candidates vying for the Philippine government's top post. During the administration of her friend and ally, President Joseph Estrada, many of the cases filed by the Aquino government were dismissed by Ombudsman Aniano Desierto, owing to technicalities (lapse of the prescriptive period for filing cases). On June 29, 1998, the Sandiganbayan (Philippine anti-corruption court) convicted the Former First Lady of the charge that she had entered into an agreement disadvantageous to the government. On appeal, the Supreme Court reversed the decision and cited Sandiganbayan Justice Francis Gatchitorena for his alleged bias against Mrs. Marcos.

Presently, Ferdinand Marcos, Jr. and Imee R. Marcos are in their last terms as Governor and Congresswoman, respectively, of Ilocos Norte. Recently, Imee Marcos announced that her mother Imelda might run for mayor of Manila in the 2007 elections. On the other hand, numerous civil and criminal cases filed against her are still pending in the Sandiganbayan.