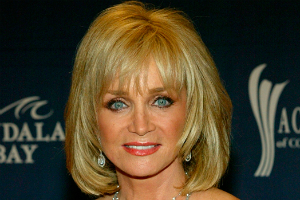 American entertainer, TV personality and singer who was twice named Entertainer of the Year, in 1980 and 1981. She received nine People's Choice Awards, six American Music Awards, Grammy's and the Music City Living Legend Award. As one of country music's brightest stars, she has been turning out hits from 1969; by the end of the '70s, her talent was fine-tuned.

Raised in Houston where her dad owned a music store and her mom was a music teacher, Barbara grew up learning to read notes before she could read words. With a stage debut at five, she soon went to Las Vegas to appear in the "Joe Maphis Show." After that she became a regular on "Town Hall Party," a local Los Angeles TV production, and made her network debut on Red Foley's "Give Star Jubilee" on ABC.

Mandrell is known for being associated with good causes, physical fitness programs, strong family ties and wearing seat belts; in February 1995, she held a benefit for the Ronald McDonald House at Loma Linda, CA children's hospital.

On 9/11/1984, she was in a violent car crash that killed the driver who hit her and totaled her silver Jaguar. Her son Matthew, 14, and daughter Jaime, 8, were not seriously injured but Barbara had a shattered right leg and a severe concussion, leading to a long period of recovery. During the time of endless pain and drugs, she found that she was pregnant. Physically and mentally devastated from the accident, she and Ken decided nonetheless to have the baby. Nathaniel Mandrell Dudney was born on 9/06/1985.

When it came time to go back to work, Barbara found that she could not remember the words to her songs and could not replicate a former performance with dancing and high heels. She was panicked at the thought of going back on stage. With good friends who were supportive, with hard work and prayer, she did it. The show went on at the Universal Amphitheater in Los Angeles, 2/28/1986.