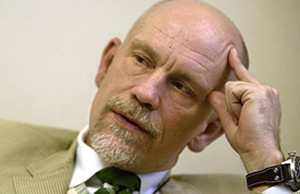 Malkovich was born in Christopher, Illinois of Croatian, Scottish, and German ancestry. His father, Daniel Malkovich, was a state conservation director and publisher of Illinois Magazine, a conservation magazine.

His mother, Joe Anne, owned the Benton Evening News (a local newspaper in Benton, Illinois), as well as the Outdoor Illinois. Because of his father's work, the Malkovich family is widely acknowledged as one of the founding families of the environmental movement in Illinois. By high school, he had transformed himself physically and was an athlete. He transferred to Illinois State University from Eastern Illinois University, with an interest in ecology, but he soon changed his major to theatre.

He will next appear with Tom Hanks and Colin Hanks in the drama The Great Buck Howard as a fading magician who takes a protege (Colin Hanks) under his wing, much to his father's (Tom Hanks) consternation. He will also have a role in the upcoming Robert Zemeckis film, Beowulf, which will star Anthony Hopkins.

Malkovich was married to actress Glenne Headly from 1982 to 1988. They divorced and Malkovich briefly dated Michelle Pfeiffer, co-star on Dangerous Liaisons. He resides in Harvard Square in Cambridge, Massachusetts. He and his wife, Nicoletta Peyran, have two children. He is fluent in French.

Of the many people he has worked with, Malkovich is often associated with Gary Sinise, a fellow Steppenwolf alum. Also, Joan Allen was a fellow drama student at Eastern Illinois University whom Malkovich brought into Steppenwolf. He met actor John Mahoney in a Chicago acting class years later, and advised him to join Steppenwolf.

On April 4, 2005, while speaking at Illinois State University, Malkovich was awarded a diploma in theatre. When attending the university as a student in the 1970s, he failed to take his last remaining graduation requirement, the U.S. Constitution test. This requirement was waived in order to award him the diploma.

Political views
Politically, Malkovich has described himself as a libertarian. He is a supporter of the death penalty. When the Chicago serial killer John Wayne Gacy was executed in 1994, Malkovich organised a champagne party for himself and his friends. Actor William Hootkins, who worked with Malkovich in BBC television's Rocket to the Moon, stated "In fact he's so right-wing you have to wonder if he's kidding."

In the United Kingdom in 2002 at the Cambridge Union Society, when asked whom he would most like to "fight to the death," he replied that he would "rather just shoot" journalist Robert Fisk and British MP George Galloway. Fisk reacted with outrage. When interviewed by The Observer, Malkovich elaborated on his comments: "I hate somebody who is supposed to be a Middle Eastern expert who thinks Jesus was born in Jerusalem. I hate what I consider his vile anti-semitism. This being said, I apologize to both Fisk and Galloway; they seem like good men... but if they make such a heinous mistake again, I will not hesitate to murder them brutally by way of the gallows". Malkovich then added: "I'm a Hitchens fan myself. But no one has thinner skins than journalists, in my experience, and I come from a family of them... They can dish it out but they can't take it. But the reason I don't like the topic, why I don't really say anything about a whiner like Fisk, is it gives them more oxygen."