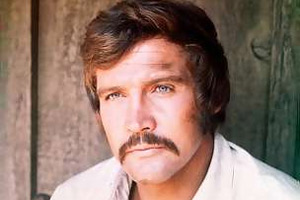 The son of Carl Yeary, who was killed in a work accident and Alice Yeary, who was killed in a hit and run accident, Yeary was born in the Detroit suburb of Wyandotte, Michigan. In 1941, when he was only two, he was adopted by his uncle and aunt, Harvey & Mildred Yeary, and moved with them to Middlesboro, Kentucky. He excelled in sports from track to football while enrolled at Middlesboro High School. Although he earned only average grades, he is the most-remembered athlete in his high school's history. Yeary graduated in 1957 and earned a scholarship to Indiana University where he competed in more sports. Yeary left Indiana University in 1959 and transferred to Eastern Kentucky University in Richmond, Kentucky after he got into a fight at a fraternity house. That same year, he suffered a severe back injury prior to the beginning of the football season, which left him paralyzed for two weeks, and ended his football career. While a student at EKU, he met actor Rock Hudson and they became good friends. It was at this time that Yeary began to think about becoming an actor. Yeary graduated from EKU in 1962 with a degree in both History and Physical Education, which gave him an option of becoming a teacher.

Career/Education
After graduation, Yeary received an offer from the St. Louis Cardinals football team for a tryout; however, he turned it down due to his need to immediately support his wife and son. The next year, 1964, he chose to move his family to Los Angeles, California, where he got a job at the Los Angeles Park and Recreation Department as the Recreation Director for North Hollywood Park. It was there that Yeary met many familiar actors and industry professionals, including Dick Clayton, who was the late James Dean's agent. Clayton suggested that he attend his acting school. Yeary also studied at Estelle Harmon's acting school at MGM.

The Big Valley
That same year, Majors got his big break when he beat out over 400 actors, including Burt Reynolds, for the co-starring role of Heath Barkley in the new western series, The Big Valley, for ABC, which starred legendary screen actress Barbara Stanwyck. Also starring on the show was another newcomer, Linda Evans, who played Heath's younger sister, Audra. There was an immediate connection between Majors, Stanwyck and Evans. Though Majors was very nervous at first, he was also very encouraged when Stanwyck took the time to be an informal acting coach. The show was an immediate hit, and he often worked longer hours on the set, studying and remembering each line. Despite the fact that he was not a horseman, he quickly learned to ride for the role. On three separate episodes, the character of Heath suffered whippings, which took an emotional toll on the actor. Majors went on to do some more films such as Will Penny (1968) with Charlton Heston. That same year, he was offered the chance to star in Midnight Cowboy (1969), but 'The Big Valley' was renewed for another season, and he was forced to decline the role which went to Jon Voight.

Majors' co-starring role on the hit legal series Owen Marshall led him to the role of a lifetime when, in 1973, he starred as Colonel Steve Austin, an ex-astronaut and test pilot with bionic limbs in the telemovie, The Six Million Dollar Man on ABC. The network decided to turn it into a weekly series early in 1974. This program made Majors a pop icon of the 1970s, and was seen in over 70 countries. Co-starring on the show was veteran character actor Richard Anderson, who played the role of Austin's boss, Oscar Goldman, and Alan Oppenheimer before Martin E. Brooks, as his doctor, Rudy Wells. The three actors created a unique chemistry on the set. Majors also invited his then wife, Farrah Fawcett, to guest-star in four episodes, and both were on the cover of magazines everywhere. He also made his directorial debut in 1975, on an episode in which Fawcett appeared.

During the show's third season, the producers gave Majors a chance to have his character experience some love in his life, namely Jaime Sommers, played by actress Lindsay Wagner. Steve and Jaime's romance ignites before she is injured in a skydiving accident and is bionically rebuilt, comparable to him, except with an ear instead of an eye. At the end of the two-part episode, Jaime dies. ABC received dozens of letters from upset fans who wanted Wagner's character brought back from the dead. This was done, and eventually the character was the star of a spin-off show, The Bionic Woman, for NBC, therefore, the romance was over and Jaime lost her memory of Steve. Both shows remained in the Top 10 for the next three and a half seasons until The Six Million Dollar Man ended in early 1978, followed by The Bionic Woman, a couple of months later.

Richard Anderson's history with Majors dates back to 1965 when he guest-starred on The Big Valley, where he was impressed by him. He later guest-starred with Majors' on The Fall Guy, in the episode Inside, Outside.

Film career
After his role as Steve Austin, Majors tried to start a feature-film career. He starred in several movies back-to-back: The Norseman (1978), Steel (1979), Killer Fish (1979), Agency (1980) and The Last Chase (1981), none of which performed well at the box office. After resuming his television career, Majors has continued to make the occasional film appearance, often in supporting roles and occasionally parodying his Steve Austin image (such as in a cameo in Bill Murray's Scrooged in 1988). Recent films have included Out Cold (2001), Big Fat Liar (2002) and Light Speed (2006).

The Fall Guy
As he was about to abandon the film industry, Majors decided to go back to television for the fourth time, and starred in The Fall Guy, as Hollywood stuntman and part-time bounty hunter, Colt Seavers. His co-stars were Douglas Barr, Heather Thomas and Markie Post, who joined the cast in 1982. It was another bonafide hit. He even invited former series' co-stars Linda Evans, Peter Breck and Richard Anderson to guest-star in episodes. The show ended in 1986, after five seasons.

Movies and big transition in networks
After The Fall Guy he left ABC after 22 years of fruitful association. In 1986, he co-starred with Dolly Parton in the CBS telefilm, A Smoky Mountain Christmas. Between 1987 and 1994, he and Lindsay Wagner starred in three The Six Million Dollar Man/The Bionic Woman movies. Also in 1989, he moved to CBS, and the following year had a recurring role in Tour of Duty, and a regular role in 1992’s, short-lived series, Raven. He also made three TV pilots that have not been shown. He co-starred on Too Much Sun, but it was canceled after only six episodes.

Prolific character actor
Majors had few television guest-starring roles until 1995, when he made an appearance on an episode of Lonesome Dove. The part led to other roles such as, Promised Land, Walker, Texas Ranger, V.I.P., The War Next Door, Jake 2.0, and he guest-starred on the popular sitcom Will and Grace, where he played Alan Arkin’s buddy Burt. He also had a recurring role on the short-lived series Son of the Beach, as Col. Seymour Kooze. He also appeared as himself on popular series such as Family Guy and Married to the Kellys.

Health problems
In the middle of 2003, Majors’ acting career was put on hold when he had double surgeries. He had a knee replacement, followed by a single heart bypass surgery, both of which were successful.

Personal life
Majors has been married four times, but his most famous marriage was to actress Farrah Fawcett, another 1970s pop icon. In 1976 Majors and Fawcett made TV history by being a husband and wife who simultaneously starred in separate top-rated shows (The Six Million Dollar Man (Majors) and Charlie's Angels (Fawcett)). They were married on July 28, 1973, and separated in 1979, but were not formally divorced until February 16, 1982. They broke up because Majors wanted his spouse to be home with him in the evenings, but she often needed to work on her show. The producers of her show made some concessions—for example she was allowed to leave the set to prepare dinner for Majors every evening—but eventually the demands of both their careers proved too onerous and they parted ways. What also hurt the marriage was when Majors had asked his good friend Ryan O'Neal to take care of Fawcett when he left town on business. When he came back, Fawcett and O'Neal became an item and are apparently still together (after several break-ups and reconciliations.)

Majors has four children from two of his marriages. He has one son, actor Lee Majors II (born circa 1962), from his 1961-1964 marriage to Kathy Robinson, who would go on to appear as an OSI agent in the three The Six Million Dollar Man/The Bionic Woman reunion movies with his father. His 1988-1994 marriage to former Playboy Playmate, Karen Velez produced one daughter, Nikki Majors, and twin sons, Dane Majors and Trey Majors. He is currently married to Faith Noelle, whom he wed on November 1, 2002.

Stars in a TV car commercial parodying the beginning of The Fall Guy ... always refusing the challenges presented in the original.

A cartoon image of Majors and later, a reference to the The Six Million Dollar Man, appears in the "Running Mates" episode of the television series Family Guy.

The football field at his old high school in Middlesboro, Kentucky was renamed in his honor.

Majors will play the character Grandpa Max in the movie Ben 10: Race Against Time.

In the second season episode of Family Guy, Running Mates, when Lois scolds Peter for making a sexist comment, Peter quickly replies: "I didn't say that, Lee Majors did." The camera then shows Majors standing nearby; he shrugs and says "What? Women are things."

In the Simpsons episode Burns' Heir, Marge has a fantasy about Lee Majors in which in a parody of The Six Million Dollar Man, Bart is graduating from Havard in the future and Lee Majors comes up to Marge asking if she wants to come with him and accepts. He picks her up and they both take off in the air in the same way as in the film.vv