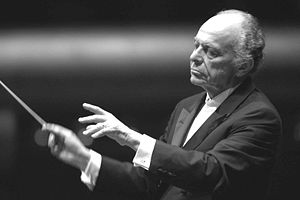 French-American violinist and conductor of the Pittsburgh Symphony and the Vienna State Opera, with many honors to his credit. Among his many awards are the Commander's Cross of Merit of the Federal Republic of Germany; the Legion of Honor of France; the Commander of the Lion of Finland; the title of Ambassador of Good Will by the United Nations; and he was named an honorary life member of the Israel Philharmonic in 1985 when he conducted its 40th Anniversary concert. He has received ten Grand Prix du Disque awards for recordings.

Born in France to American parents, Maazel grew up in Los Angeles and Pittsburgh, PA. At age four it was discovered that he had perfect pitch and a photographic memory. A child prodigy as a violinist and pianist, he made his conducting debut at age seven with the NBC Symphony at the invitation of Toscanini. At 12 he conducted the New York Philharmonic. Known for his exacting musicianship and intense interpretations of classical music, he made his Cleveland Orchestra debut 3/04/1943 playing violin. Attending the University of Pittsburgh at age 16, he studied languages, mathematics and philosophy and then continued his training in Europe. In 1951 he studied baroque music in Italy on a Fulbright Fellowship.

In 1960 he became the first American and youngest conductor at Bayreuth, Germany. He began his tenure as Music Director of the Cleveland Orchestra at the beginning of the 1972-73 season. Maazel conducted at the Sydney Opera House in Australia during the opening week of 10/20/1973. He was General Manager and Artistic Director of the Vienna State Opera from September 1982 to 4/06/1984 at which time he tendered his resignation. The drastic changes that he made, some anti-Semitic, were disliked by many and he felt he could no longer do his job with the control he needed. His last performance there was on 6/29/1984.

In 1988 he became the conductor for the Pittsburgh Symphony and retired in early 1996. After this tenure he composed for five months of the year and conducted the Bavarian Radio Symphony Orchestra in Munich, Germany for the balance. He enjoys playing billiards. He owns a farm in Virginia and a home in Monaco overlooking the Palace. Maazel is writing an autobiographical-travel book, "Conducted Tour."