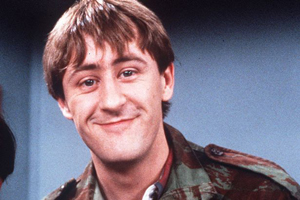 He is best known for his roles as Rodney Trotter in Only Fools and Horses, Gary Sparrow in Goodnight Sweetheart, and as Adam Parkinson in Carla Lane's series Butterflies.

Lyndhurst also prominently starred as Ashley Philips in The Two of Us, as Fletch's son Raymond in Going Straight, the sequel to the classic British sitcom Porridge, Jimmy Venables in After You've Gone, and Freddie 'The Frog' Robdal in the Only Fools and Horses prequel Rock & Chips.

Born on 20 April 1961, Nicholas was a child student at Corona Theatre School. He appeared in a succession of television commercials and children's films in the late 1970s. Lyndhurst first gained national recognition at the age of seventeen in the sitcom Butterflies written by Carla Lane, in which he played the character Adam Parkinson. He then played Raymond Fletcher the teenage son of Norman Stanley 'Fletch' Fletcher played by Ronnie Barker in Going Straight before achieving national stardom in the series Only Fools and Horses in which he played Rodney Trotter, the younger brother of the main character Derek "Del Boy" Trotter. In Only Fools and Horses Nicholas was immortalised by the catchphrase aimed at his character 'Rodney, "you plonker".

This programme started as a small comedy in 1981 and rapidly grew in popularity until it reached its peak in 1996 with its Christmas Day show in the UK. Lyndhurst has appeared in the show since the very start, right up to its most recent airing at Christmas 2003. '[Only Fools and Horses reached No.1 British sitcom ever in the BBC poll in 2003/04.

During the 1990s, Lyndhurst also appeared in ITV's The Two of Us with Janet Dibley and The Piglet Files, as well as in a number of stage performances.

Between 1993 and 1999, he played the complex lead character of Gary Sparrow in the fantasy sitcom Goodnight Sweetheart. At around the same time, he was the face and voice on the TV and radio commercials for the telecommunications chain People's Phone. In 1997, he was offered the role in The Full Monty playing lead role Gary but declined.

Between 1997 and 1999, Nicholas Lyndhurst was the public face of the stationery chain store WH Smith, starring in their adverts as all four members of one family. He won a BAFTA for his acting in the adverts. In 1999, he played the villainous Uriah Heep opposite Daniel Radcliffe and Maggie Smith in David Copperfield.

In 2006, he appeared as Cruella de Vil's chauffeur, Reg Farnsworth, at the Children's Party at the Palace.

In 2007, Lyndhurst returned to the BBC with his first new sitcom in thirteen years, After You've Gone, in which he plays a divorced dad moving back into the marital home to look after his daughter (Dani Harmer) and son (Ryan Sampson) together with his mother in law, played by Celia Imrie, after his ex wife goes to work as a recovery nurse on a third world disaster relief mission.

Lyndhurst played Freddie Robdal, the 1960s gangster father of Rodney Trotter in the prequel to Only Fools and Horses - Rock & Chips. The show centres around Del Boy, Robdal and Joan Trotter in early 1960s Peckham. It was first broadcast on 24 January 2010, with another special transmitted on 29 December 2010, and the final episode in Easter 2011. Lyndhurst's stage performances have been relatively few, but he received good critical notices for his performance as Norman in Sir Ronald Harwood's The Dresser, directed by Peter Hall, and for his Trinculo in The Tempest.

He lives in West Sussex with his wife Lucy, a former ballet dancer (married in Chichester, West Sussex, 1999).

They have a son, Archie Bjorn Lyndhurst (born Westminster). Lyndhurst has a passion for outdoor activities, including flying aeroplanes, of which he owns two, surfing and deep sea diving. He is also a keen beekeeper.