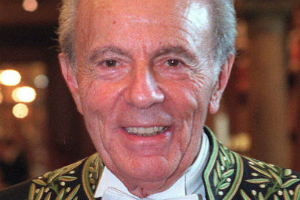 Lwoff was born in Ainay-le-Château, Allier, in Auvergne, France, the son of Marie (Siminovitch), an artist, and Solomon Lwoff, a psychiatrist.

He joined the Institute Pasteur in Paris when he was 19 years old. In 1932, he finished his PhD and, with the help of a grant from the Rockefeller Foundation, moved to the Kaiser Wilhelm Institute for Medical Research of Heidelberg to Otto Meyerhof, where he did research on the development of flagellates. Another Rockefeller grant allowed him go to Cambridge in 1937.

In 1938, he was appointed departmental head at the Institut Pasteur, where he did groundbreaking research on bacteriophages and on the poliovirus.

He was awarded numerous prizes from the French Académie des Sciences, the Grand Prix Charles-Leopold Mayer, the Leeuwenhoek Medal of the Royal Netherlands Academy of Arts and Sciences in 1960 and the Keilin Medal of the British Biochemical Society in 1964.

He was awarded a Nobel Prize in Medicine in 1965 for the discovery of the mechanism that some viruses (which he named proviruses) use to infect bacteria.