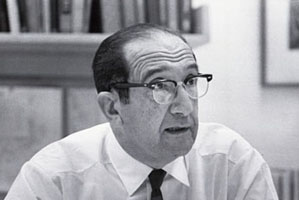 Salvador Edward Luria (August 13, 1912 – February 6, 1991) was an Italian microbiologist naturalized American. He won the Nobel Prize in Physiology or Medicine in 1969, with Max Delbrück and Alfred Hershey, for their discoveries on the replication mechanism and the genetic structure of viruses.

He attended the medical school at the University of Turin studying with Giuseppe Levi. There, he met two other future Nobel laureates: Rita Levi-Montalcini and Renato Dulbecco. He graduated from the University of Turin in 1935. From 1936 to 1937, Luria served his required time in the Italian army as a medical officer. He then took classes in radiology at the University of Rome. Here, he was introduced to Max Delbrück's theories on the gene as a molecule and began to formulate methods for testing genetic theory with the bacteriophages, viruses that infect bacteria.

In 1938, he received a fellowship to study in the United States, where he intended to work with Delbrück. Soon after Luria received the award Benito Mussolini's fascist regime banned Jews from academic research fellowships. Without funding sources for work in the U.S. or Italy, Luria left his home country for Paris, France in 1938. As the Nazi German armies invaded France in 1940, Luria fled on bicycle to Marseilles where he received an immigration visa to the United States.

Luria arrived in New York City on September 12, 1940 and soon changed his first and middle names. With the help of physicist Enrico Fermi, whom he knew from his time at the University of Rome, Luria received a Rockefeller Foundation fellowship at Columbia University. He soon met Delbrück and Hershey, and they collaborated on experiments at Cold Spring Harbor Laboratory and in Delbrück's lab at Vanderbilt University.

His famous experiment with Delbrück in 1943, known as the Luria-Delbrück experiment, demonstrated statistically that inheritance in bacteria must follow Darwinian rather than Lamarckian principles and that mutant bacteria occurring randomly can still bestow viral resistance without the virus being present. The idea that natural selection affects bacteria has profound consequences, for example, it explains how bacteria develop antibiotic resistance.

From 1943 to 1950, he worked at Indiana University. His first graduate student was James D. Watson, who went on to discover the structure of DNA with Francis Crick. In January 1947, Luria became a naturalized citizen of the United States.

In 1950, Luria moved to the University of Illinois at Urbana-Champaign. He discovered that a culture of E. coli was able to significantly reduce the production of phages grown in another strains. However once the phage become established in that strain, they also become restricted in their ability to grow in other strains.[3] It was later discovered by other researchers that bacteria produce enzymes that cut viral DNA at particular sequences but not the bacteria's own DNA, which is protected by methylation. These enzymes became known as restriction enzymes and developed into one of the main molecular tools in molecular biology.

In 1959, he became chair of Microbiology at the Massachusetts Institute of Technology (MIT). At MIT, he switched his research focus from phages to cell membranes and bacteriocins. While on sabbatical in 1963 to study at the Institut Pasteur in Paris, he found that bacteriocins impair the function of cell membranes. Returning to MIT, his lab discovered that bacteriocins achieve this impairment by forming holes in the cell membrane, allowing ions to flow through and destroy the electrochemical gradient of cells. In 1972, he became chair of The Center for Cancer Research at MIT. The department he established included future Nobel Prize winners David Baltimore, Susumu Tonegawa, Phillip Allen Sharp and H. Robert Horvitz.

In addition to the Nobel Prize, Luria received a number of awards and recognitions. He was named a member of the National Academy of Sciences in 1960. From 1968 to 1969, he served as president of the American Society for Microbiology. In 1969, he was awarded the Louisa Gross Horwitz Prize from Columbia University together with Max Delbruck, co-winner with Luria of the Nobel Prize in Physiology or Medicine in 1969. In the U.S. he won the 1974 National Book Award in Science for his popular science book Life: the Unfinished Experiment and received the National Medal of Science in 1991.

Throughout his career, Luria was an outspoken political advocate. He joined with Linus Pauling in 1957 to protest against nuclear weapon testing. Luria was an opponent of the Vietnam War and a supporter of organized labor. In the 1970s, he was involved in debates over genetic engineering, advocating a compromise position of moderate oversight and regulation rather than the extremes of a complete ban or full scientific freedom. Due to his political involvement, he was blacklisted from receiving funding from the National Institutes of Health for a short time in 1969.

He died in Lexington, Massachusetts of a heart attack.