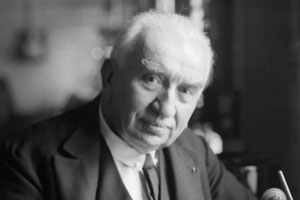 French scientist and cinematographer. He worked with his brother Auguste to invent the cinematograph, a combination motion-picture camera, printer, and projector. Though no one single person can be considered the one inventor of the cinema, Louis Lumière has perhaps the strongest claim to the title. Some of the first motion pictures were produced and shown to audiences with the apparatus devised by Louis and Auguste, which projected films onto a screen. The invention was patented on 2/13/1895.

The brother were the son of a businessman, Antoine Lumière, who saw that his boys received a good education. The younger son, Louis, developed a dry-plate photo process, known as Etiquette bleue, which brought fame and financial success to the family business. To manufacture and commercialize the plates, Antoine bought a large tract of land in the Monplaisir quarter in the Lyon suburbs.

In the autumn of 1894, Antoine Lumière asked his sons to work on the problem of animated images, which had so far stumped such great inventors as Edison and others. This paternal push in the right direction resulted in the invention of the "Lumière Cinematograph."

The first film using the new invention was "Leaving the Lumière Factory." taking place in Lyon, France on 3/19/1895 in what is now known as the Rue du Premier Film. This first film opened the way for the development of cinema.

A program of short films directed and photographed by Louis was first unveiled to the general public on 12/28/1895: a date that many historians claim to be the birth date of the cinema as we know it. The showing of approximately ten short films lasting only twenty minutes in total was held in the basement lounge of the Grand Cafe on the Boulevard des Capucines in Paris, It was the very first public demonstration of their device they called the Cinematograph, which effectively functioned as camera, projector and printer all in one. Their film sequence of a train pulling into the station reportedly had audiences screaming and ducking for cover as they believed that the train itself was about to plow into the theater.

The cinematographer was an immediate hit, and its influence was colossal - within just two years, the Lumiere catalogue included well over a thousand films, all of them single-shot efforts running under a minute, and many photographed by cameramen sent to various exotic locations. Although Louis also staged some fictional scenes, the bulk of the work bearing his name would nowadays be described as documentary reportage. In common with many cinema pioneers, he perversely saw no future for the medium, and retired in 1900 to make still photographic equipment - the field in which he originally made his reputation.

In 1907 the brothers invented the auto chrome plate, the first popular direct-color photographic process. Louis received the Progress Medal of the Royal

Photographic Society in 1909. The Lumiere Brothers have been credited with over 1,425 different short films and had even filmed aerial shots years before the very first airplane would take to the skies.

Louis Lumière died 6/06/1948, Bandul, France. Even today, we are impressed by the creative potential of the Lumière brothers and their cameramen-technicians who in 1896 went out across the world in search of magical, flickering images caught on film.