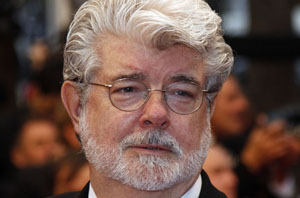 He is one of American film industry's most financially successful independent directors and producers, with an estimated net worth of $3.6 billion.

George Walton Lucas Jr. was born in Modesto, California to George Walton Lucas, Sr. (1913–1991) and Dorothy Ellinore Bomberger Lucas. His father, who was mainly of British and Swiss-German heritage, his mother was a member of a prominent Modesto family (one of her cousins is the mother of former U.S. Secretary of Agriculture and director of UNICEF Ann Veneman) and was mainly of German and Scots-Irish heritage.

His parents sold retail office supplies and owned a walnut ranch in California. His experiences growing up in the sleepy suburb of Modesto and his early passion for cars and motor racing would eventually serve as inspiration for his Oscar-nominated low-budget phenomenon, American Graffiti. Before young Lucas became obsessed with the movie camera, he wanted to be a race car driver, but a near fatal accident in his souped-up Fiat just days before his high school graduation quickly changed his mind. Instead, he attended community college and developed a passion for cinematography and camera tricks.

During this time an experimental filmmaker named Bruce Baillie tacked up a bedsheet in his backyard in 1960 to screen the work of underground, avant-garde 16 mm filmmakers like Jordan Belson, Stan Brakhage and Bruce Conner. For the next few years, Baillie's series, dubbed Canyon Cinema, toured local coffeehouses, where art films shared the stage with folksingers and stand-up comedians.

These events became a magnet for the teenage Lucas and his boyhood friend John Plummer. The 19-year-olds began slipping away to San Francisco to hang out in jazz clubs and find news of Canyon Cinema screenings in flyers at the City Lights bookstore. Already a promising photographer, Lucas became infatuated with these abstract films.

"That's when George really started exploring," Plummer recalls. "We went to a theater on Union Street that showed art movies, we drove up to San Francisco State for a film festival, and there was an old beatnik coffeehouse in Cow Hollow with shorts that were really out there." It was a season of awakening for Lucas, who had been a D-plus slacker in high school.

At an autocross track, Lucas met his first mentor in the film industry - famed cinematographer Haskell Wexler, a fellow aficionado of sleek racing machines. Wexler was impressed by the way the shy teenager handled a camera, cradling it low on his hips to get better angles. "George had a very good eye, and he thought visually," he recalls.

Lucas then transferred to the University of Southern California School of Cinematic Arts. USC was one of the earliest universities to have a school devoted to motion picture film. During the years at USC, George Lucas shared a dorm room with Randal Kleiser. Lucas was deeply influenced by the Filmic Expression course taught at the school by filmmaker Lester Novros which concentrated on the non-narrative elements of Film Form like color, light, movement, space, and time. Another huge inspiration was the Serbian montagist(and dean of the USC Film Department) Slavko Vorkapich who had been a colleague of Sergei Eisenstein's before moving to Hollywood to make stunning montage sequences for studio features at MGM and Paramount. Vorkapich taught the autonomous nature of the cinematic art form, emphasizing the unique dynamic quality of movement and kinetic energy inherent in moving film images.

Lucas saw many inspiring movies in class, particularly the visual films coming out of the National Film Board of Canada like Arthur Lipsett's 21-87, the French-Canadian cameraman Jean-Claude Labrecque's kinetic cinema verite 60 Cycles, the work of Norman McLaren, and the documentaries of Claude Jutra. Lucas fell madly in love with pure cinema and quickly became prolific at making 16 mm nonstory noncharacter visual tone poems and cinema verite with such titles as Look At Life, Herbie, 1:42.08, The Emperor, Anyone Lived in a Pretty (how) Town, filmmaker, and 6-18-67. He was passionate and interested in camerawork and editing, defining himself as a filmmaker as opposed to being a director, and he loved making abstract visual films that create emotions purely through cinema.

After graduating with a bachelor of fine arts in film in 1967, he tried joining the United States Air Force as an officer, but was turned down because of his numerous speeding tickets. He was later drafted by the Army, but tests showed he had diabetes, the disease that killed his paternal grandfather. Lucas was prescribed medication for the disease, but his symptoms are sufficiently mild that he does not require insulin and would not be considered diabetic under the disease's current classification.

In 1967, Lucas re-enrolled as a USC graduate student in film production. Working as a teaching instructor for a class of U.S. Navy students who were being taught documentary cinematography, Lucas directed the short film Electronic Labyrinth THX 1138:4EB, which won first prize at the 1967-68 National Student Film Festival, and was later adapted into his first full-length feature film, THX 1138. Lucas was awarded a scholarship by Warner Brothers to observe the making of Finian's Rainbow (1968) which was being directed by Francis Ford Coppola, who at the time was revered among film school students of the time as a cinema graduate who had "made it".

Lucas co-founded the studio American Zoetrope with Coppola — whom he met during the internship at Warner Brothers — hoping to create a liberating environment for filmmakers to direct outside the perceived oppressive control of the Hollywood studio system. From the financial success of his films American Graffiti (1973) and Star Wars (1977), Lucas was able to set up his own studio, Lucasfilm, in Marin County in his native Northern California. Skywalker Sound and Industrial Light and Magic, the sound and visual effects subdivisions of Lucasfilm, respectively, have become among the most respected firms in their fields. Lucasfilm Games, later renamed to LucasArts, is highly regarded in the gaming industry.

Some consider Star Wars to be the first "high concept" film, although others feel the first was Steven Spielberg's Jaws, released two years prior. Lucas and Spielberg had been good friends for some time and eventually worked together on several films, notably the Indiana Jones trilogy, Raiders of the Lost Ark (1981), Indiana Jones and the Temple of Doom (1984), and Indiana Jones and the Last Crusade (1989).

On a return on investment basis, Star Wars proved to be one of the most successful films of all time. During the filming of Star Wars, Lucas waived his up front fee as director and negotiated to own the licensing rights — rights which the studio thought were nearly worthless. This decision earned him hundreds of millions of dollars, as he was able to directly profit from all the licensed games, toys, and collectibles created for the franchise. In 2006 Forbes Magazine estimated Lucas' personal wealth at US$3.5 billion. In 2005 Forbes.com estimated the lifetime revenue generated by the Star Wars franchise at nearly $20 billion.

On October 3, 1994, Lucas started to write the three Star Wars prequels, and on November 1 that year, he left the day-to-day operations of his filmmaking business and started a sabbatical to finish the prequels.

This rumor was debunked at Star Wars Celebraion 4 in Los Angeles, California which took place May 24th-May 28th, 2007. When Steve Sansweet, Director of Content Management and Head of Fan Relations at Lucasfilm, was asked about the proposed 2 films post "Return of the Jedi" he stated that it was a misunderstanding of what Lucas was explaining. According to Sansweet, Lucas was referring to the two Star Wars television projects currently in production; Star Wars: Clone Wars which is a CG animated show set to debut in the Fall of 2008, and the yet to be titled Star Wars live action television series set to debut in either 2009 or 2010.

In 1969, Lucas married film editor Marcia Lou Griffin, who went on to win an Oscar for her editing work on the original (Episode IV) Star Wars film. They adopted a daughter, Amanda, in 1981, and divorced in 1983 . Lucas has since adopted two more children: Katie, born in 1988, and Jett, born in 1993 . All three of his children have appeared in the prequels. Lucas had also been in a long relationship, engagement and all, with singer Linda Ronstadt. He has recently been observed at several events with Mellody Hobson, president of Ariel Capital Management, who accompanied him to the 79th Academy Awards ceremony in February 2007.

Lucas was born and raised in a strongly Methodist family. After inserting religious themes into Star Wars he would eventually come to identify strongly with the Eastern religious philosophies he studied and incorporated into his movies, which were a major inspiration for "the Force." Lucas eventually came to state that his religion was "Buddhist Methodist."