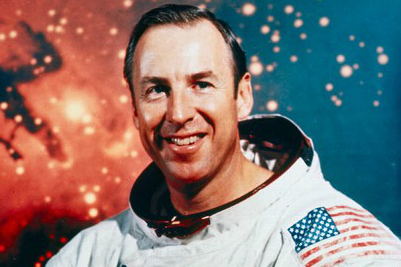 American test pilot and astronaut. Lovell was selected as an astronaut in September 1962 after being a test pilot and Navy Captain for four years. He was the Command module pilot of Apollo 8 on 12/21/1968, which was man's first flight around the moon. His message, "Houston, we have a problem," from aboard the ill-fated Apollo 13 mission was one of the most memorable understatements of the space age. His 1994 book "Lost Moon," which was conceived by the crew, chronicles that mission and was made into the movie "Apollo 13."

A space buff from childhood, Lovell always dreamed on landing on the moon. On his way to achieving his dream, he was the Command module pilot on Apollo 8 which circled the moon 12/21/1968. The next trip was to land on the moon with the Apollo 13 mission. From the beginning it wasn't meant to be, and after a harrowing trip back to earth, the capsule splashed down in the Pacific on 4/17/1970.

He left the space program in 1973, having logged more hours in space than any other astronaut of his time. Moving into the business word, he ran a telephone-equipment business until retiring in 1991. Feeling an obligation to tell the entire Apollo 13 story, Lovell worked on an outline written by fellow astronaut, Jack Swigert, and in 1994 the details of the trip came out in the book "Lost Moon." Lovell was a technical adviser for the filming of the movie "Apollo 13," which is based on the book.

Married to Marilyn, they have four kids: the oldest, Barbara, now a housewife, then Susan, also a housewife, son, James Jr., a chef and the youngest, Jeff, a pharmaceutical salesman.