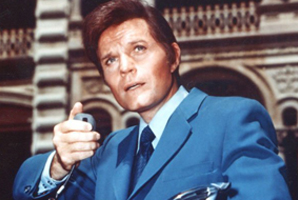 He was known for his starring role as Steve McGarrett in the American television program Hawaii Five-O from 1968 to 1980. Lord appeared in feature films earlier in his career, among them Man of the West (1958). He was the first actor to play recurring character Felix Leiter, in Dr. No, the first James Bond film.

Born in Brooklyn, New York, Lord was the son of Irish-American parents. His father, William Lawrence Ryan, was a steamship company executive. He grew up in Morris Park (now known as Richmond Hill), Queens, New York.

Young Lord developed his equestrian skills on his mother's fruit farm in the Hudson River Valley. He started spending summers at sea, and from the deck of cargo ships, painted and sketched the landscapes he encountered — Africa, the Mediterranean and China. He was educated at St. Benedict Joseph Labre School, John Adams High School, in Ozone Park, New York, and the United States Merchant Marine Academy, then located at Fort Trumbull in New London, Connecticut, graduating as an Ensign with a Third Mates License. He attended New York University (NYU) on a football scholarship, and earned a degree in Fine Arts.

He spent the first year of the United States's involvement in World War II with the U.S. Army Corps of Engineers, building bridges in Persia. He returned to the Merchant Marine as an Able Seaman before enrolling in the deck officer course at Fort Trumbull. While making maritime training films, he took to the idea of acting.

Lord received training from Sanford Meisner at the Neighborhood Playhouse. He worked first as a car salesman for Horgan Ford, then later as a Cadillac salesman in New York to fund his studies. Later he studied at the Actors Studio.

His Broadway debut was as Slim Murphy in Horton Foote's The Traveling Lady with Kim Stanley. The show ran for 30 performances, October 27, 1954 through November 20, 1954. Lord won the Theatre World Award for his performance. Lord was then cast as Brick in a replacement for Ben Gazzara in the 1955–1956 production of Cat on a Hot Tin Roof. He had been in The Little Hut (his first play), The Illegitimist, and The Savage.

His first commercial film role was in the 1949 film The Red Menace a.k.a. Project X, an anti-Communist production. He was associate producer in his 1950 film Cry Murder. In 1957, Lord starred in Williamsburg: the Story of a Patriot, which has run daily at Colonial Williamsburg since then. In 1958, Lord co-starred as Buck Walden in God's Little Acre, the film adaptation of Erskine Caldwell's 1933 novel.

Lord was the first actor to play the character Felix Leiter in the James Bond film series, introduced in the first Bond film, Dr. No. According to screenwriter Richard Maibaum, Lord demanded co-star billing, a bigger role and more money to reprise the role in Goldfinger, which resulted in director Guy Hamilton casting the role to an older actor to make Leiter more of an American "M".

In 1962, Lord starred as series namesake Stoney Burke, a rodeo cowboy from Mission Ridge, South Dakota. The basis for the series was real-life champion rodeo rider Casey Tibbs. The series featured Warren Oates and Bruce Dern in recurring supporting roles. Lord credited Gary Cooper as his on-screen role model, and the inspiration for his characterization of Stoney Burke.

Lord was considered for Eliot Ness in The Untouchables before Robert Stack won the role. In 1965 he guest-starred as Colonel 'Pres' Gallagher in second season episode 5, "Big Brother" of 12 O-Clock High (TV series). Other television guest appearances include Appointment with Adventure, Bonanza, High Chaparral, The Man from U.N.C.L.E., The Reporter starring Harry Guardino, The Fugitive, The Invaders, Rawhide, Ironside, and The F.B.I. Lord appeared on the first episode of Have Gun, Will Travel. In 1968, Lord appeared with Susan Strasberg in the film The Name of the Game is Kill.

Lord starred for twelve seasons on Hawaii Five-O as Detective Steve McGarrett, appointed by the governor to head the state police criminal department in Honolulu, Hawaii. The opening sequence includes a shot of Lord standing on a penthouse balcony of The Ilikai hotel. Chin Ho Kelly, the name of the police detective played by Kam Fong, was a tip-of-the-hat to Ilikai developer Chinn Ho. Lord's catchphrase, "Book 'em, Danno!", became a part of pop culture. He was instrumental in the casting of native Hawaiians, instead of mainland actors. Lord insisted his character drive Ford vehicles; McGarrett drove a 1967 Mercury Park Lane in the pilot, a 1968 Park Lane from 1968–1974, and a 1974 Mercury Marquis for the remainder of the series (this very car was shown in the 2010 remake). Lord was a perfectionist. When series creator Leonard Freeman died in 1974, the show's ownership was shared among Lord, CBS, and Freeman's estate, with a contract that made Lord executive producer and gave him complete control over content. He was a hands-on partner who paid attention to minute details, and was known for battles with network executives.

During his years at NYU, Lord and his brother Bill opened the Village Academy of Arts. Jack's childhood dream was to become an artist. His first professional sale was in 1941 to the Metropolitan Museum of Art for his two linoleum cuts, entitled Vermont and Fishing Shacks, Block Island.

Lord's first marriage to Anne Willard ended in divorce in 1947. Lord met his son (from his first marriage) only once when the boy was an infant. The boy was later killed in an accident at age thirteen.

On January 17, 1949, Lord married Marie de Narde, who gave up her own career in fashion design to devote her life to him. Marie designed Lord's off-camera wardrobe, as well as her own.

Lord was a chain-smoker who failed at traditional methods of quitting. According to Lord, it was his faith in God which broke him of his habit. Lord and a friend visited a Catholic church where both knelt while Lord promised God he would stop smoking.

Lord was known for being a cultured man who loved reading poetry out loud on the set of his television show and for being reclusive at his Honolulu home.

Cinematographers sometimes refer to a 50mm lens as a "Jack Lord" in reference to the name of the show that made him famous.

After his series ended in 1980, Lord kept a low profile, rarely making public appearances. His final TV appearance was that same year in a failed pilot for CBS called M Station: Hawaii which he also directed. Lord suffered from Alzheimer's disease in his last years. He died of congestive heart failure at his home in Honolulu, Hawaii, on January 21, 1998, at age 77, leaving an estate of $40 million. He was a philanthropist and the entire estate went to Hawaiian charities upon his wife Marie's death in 2005.